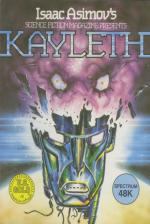 I was wandering around the bookshops down town and I thought I might as well get this book along with Colour of Magic. After searching my way through just about every Isaac Asimov title (and there are quite a few) I gave up, only to discover on getting back home that this game is from the Isaac Asimov science fiction magazine rather than the man himself. My mistake, you might think, but as with all misconceptions something is shown up here - like where is this game coming from? (Man.)

Anyway, wherever it comes from, the story isn't half bad. It relates how the peace-loving and highly advanced Zyroneans had it cushy until this Kayleth arrived to wreak havoc and destruction. The story, by sheer coincidence, has a passing resemblance to a Star Trek episode lovingly repeated by the good old Beeb in November last ear the one where this advanced sit, oblivious, high up in the clouds while the troglodytes in their caves are kept down by an insidious gas from the caves ' rock walls). In this game the rare mineral, chromazin, is the desired commodity and Kayleth, employing atomic disemblers and ruthless androids, enslaves the Zyronears and humbles them with the task of clawing out the subterranean rocks to extract the precious ore he so desperately needs.

Now, in true sci-fi comic book tradition, there has to be some beck who will put principle above short term acquiescence and, yes you've guessed it, the pillock is the character you hoist around this jc4ly jaunt of a program. So as to leave you in no doubt as to the enormity of the task you've let yourself in for, the program kicks off with your good self firmly strapped to a conveyor belt which is moving ever closer to a pair of cold, steel claws which rhythmically descend and spew out a charge of electric blue light. Now I wouldn't worry so much about the claws being cold (you think the robot would have the decency to warm its hands first, really); it's that electric blue light which should have you struggling with your arm restraints. By the way, if you're wondering why your character hasn't a name, well, that's all part of the story - your mind has been emptied by brainwashing, and only playing through the game can cast any light on who you might be.

The feel of the game is highly professional, as you might expect from US Gold. The loading screen is flashy and constructed in an unusual manner with a number counting down a fast load. At the start an option to preview the game is offered and it would take a will of iron to resist. Revealed are the super graphics and no-nonsense location descriptions, but I'm afraid I really can't get over one major failing with these ADVENTURESOFT games (the last one was Rebel Planet, Aug 86 TRAIL) and that is the blinding white background. It's a bit like the advert they used to run about motorists dazzling the guy in front with headlights on full beam. The child in the car asks if daddy was blinded to which he replies, ' no, I wasn't looking'. The same goes for me reviewing these games. To avoid a headache for the rest of the day the brightness on the screen must be turned right down which causes the pictures to disappear. It's a shame not seeing the pictures - but who wants a headache?

I did have a quick run through the preview pics with the brightness up and it seems that a lot of effort has gone into the graphics. Three-stage animation is often seen, as with the hug two-headed Mokki Ray in the Twin Peril forest and the ferocious Zemps in the ancient citadel of Zenron. To save memory now and again mirror images are used to form a symmetrical picture but all-in-all, the pictures are always impressive.

Vocabulary-wise the game moves beyond simple verb/noun input with multiple commands, and commands are separated with a comma or the words AND and THEN. A further refinement uses IT as in GET THE PYXIS AND OPEN IT.

Kayleth follows in the footsteps of Rebel Planet. As with that game, this one has a lot to offer the dedicated adventure enthusiast. In addition, science fiction fans may find much of interest in what is a very well-constructed plot.

Kayleth follows in the footsteps of Rebel Planet. Both have a lot to offer the dedicated adventure enthusiast. In addition, science fiction fans may find much of interest in the very well-constructed plots.