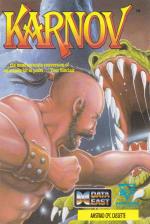 The evil wizard Ryu. better watch out. because there's a flamethrowing Russian headed in his direction. Karnov is that Russian and wizard bashing is not all he's after, there's also the lost treasure of Babylon that was taken by Ryu.

Across the bottom of the screen is a row of icons that are initially empty, but you'll get an opportunity to fill them later The time left is also displayed there and at the top of the screen your score is shown The rest of the screen is taken up with a four way scrolling playing area, in which you will encounter the minions of Ryu.

Big birdlike creatures, ostrich-riding skeletons, sword-wielding figures in robes and rock throwers are some of the foes that you will encounter. Collision with them loses you a life; extra lives are gained by collecting letter K's.

There are 10 items that you can collect other than the K's and they are: apples, boots, bombs, ladders, boomerangs, flames, wings, helmet, mask and trolley. Apples increase your firepower for extra destructive power. The other nine appear as icons at the bottom of the screen. The boots give you more powerful leaps and a faster movement rate. Bombs can be used to blow anything up and the ladder gets you climbing up the screen. If you throw a boomerang, don't forget to catch it.

Sound effects are average, the best being the lightning bolt from which you materialize, and tunes are non-existent. The graphics lack colour and the scrolling is not particularly smooth. Animation is very jerky too and at times there is flicker.

It's another in the long line of scrolling shoot-'em-ups where you charge around on legs, instead of flying a space ship. The multi-load facility does enable it to have many levels, but at the end of the day it's nothing new.

Why haven't software houses got the message about restart points yet? It is infuriating to get through hordes of monsters, only to make a mistake and get sent way back down the level. That's the main problem with what is otherwise a reasonable arcade game, full of lots of action and challenges.

You can see everything clearly in green.

Grab Factor 56%
P. Fairly easy to grasp what's going on and get blasting.
N. If you lose a life in the wrong place, it can be impossible to continue!