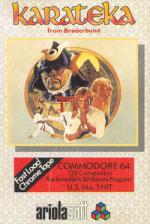 Another karate game hits the C64, although this time it's more of an arcade adventure like the arcade game Kung Fu Master than the Karate Champ clones which have been released recently.

Karateka places you in the age-old situation of rescuing a beautiful Princess. You take the role of Karateka, master of unarmed combat, and you are required to fight your way into the fortress of Akuma and rescue Princess Mariko, an orientally distressed damsel who's being held prisoner there. Naturally there are sentries guarding the palace and these too are a dab hand at karate, and naturally you have to fight every inch of the way in.

The game starts just as Karateka reaches Akuma's mountaintop castle and the action commences almost immediately. First you must eliminate the guard standing outside the main gate. Once this task is completed, you can enter the gate and gain access to the inner courtyard of the fortress.

Fighting is a lot easier than the initially confusing Way of the Exploding Fist with its multitude of different moves. In Karateka there is the usual walk right and left and you also have run, which is useful when you want to move to another location swiftly. She only trouble with the run mode is that you have to pull up, stop and go into fight mode when you face an opponent. If you don't, then he'll knock you down with one blow since you're undefended. During combat there are six blows under your control: high, medium and low kicks and punches. The punches are best used in close quarter fighting, the kicks being more effective when you are further away from your opponent.

To beat an opponent you have to sap him of his energy by hitting or kicking him many times. His and your energy are shown at the bottom of the screen in the form of bars. Every time a person is hit their energy bar diminishes by a certain amount, and once it reaches zero then the next punch or kick will kill him. If you break off from fighting and back away for a while then your energy slowly creeps back up again - useful when you've just had a rather hefty beating.

Once you've beaten the first opponent and have entered the fortress the program switches movie-style to Akuma's room. A guard enters and Akuma points meaningly at the door, the guard turns and swiftly leaves the room, and starts pounding down the corridor towards the courtyard to engage you in battle. Getting across the courtyard usually involves three or more fights, but once you have, you reach the entrance to the main keep of the fortress.

Inside the building the program switches back to Akuma's room and another little intermission showing the top guards being sent out to repel you. These are Akuma's best, and just in case there's any doubt that they might fail, Akuma also sends out his Eagle to hassle you while you're running along the corridor in between fights. If you manage to fight your way past this lot, then you get to the inner door inside the fortress. It's here where you have to battle with Akuma himself in a final deadly conflict. Should you manage to beat the evil swine then you'll be able to enter the Princess's dungeon and rescue her. Oh, and don't forget your royal etiquette either...!

I first saw this game on the Apple around two years ago and was completely stunned by the graphics and overawed by the gameplay. From then on I could only dream of the day when it might make an appearance on the C64, but now it's arrived I'm not quite so enthusiastic. White the actual principles behind the game are most definitely there, the speed is not. This put me right off from the start as this was, in the main, what made the game so playable in the first place. The scrolling is as slow as the character movements and is quite jerky at times. The animation however is first class all round. The presentation is excellent, and combined with the effective use of sound and music there is a certain film-like quality about the game, making it that bit more absorbing. Unfortunately some of this atmosphere is lost on the cassette version, as one has to stop occasionally to load up the next stage. Still, it does prove useful though, in that one can have a rest in the meantime. Karateka was a great game on the Apple but unfortunately the Commodore conversion doesn't carry quite the same impact.

The trouble with Karateka is that the gameplay is really, really slow. It's so slow it's almost like playing a dream! If it had been speeded up, then the game would hover on being brilliant, but as it stands it's just good. There are some nice touches like the little movie bits in between the action. There's also an excellent title screen with atmospheric sound effects showing the Princess being locked in her cell. Reaching the final door isn't too hard once you've mastered the fighting techniques, but every time I try to go through it, it falls on my bonce... this gets immensely annoying since I can reach the same place time after time. Still, even with its speed restriction, Karateka is fun to play, and the desire to rescue the poor ol' Princess is high. (What's the reward one wonders??)!

Hookability 82%
Who can refuse a distressed Princess...?

Lastability 71%
...but will you want to keep rescuing her?

Value For Money 78%
Some of its drawbacks lower the rating a touch.

Overall 80%
Excellent variant on a Kung Fu theme, but it's a shame it's so slow.

An excellent variant on a Kung Fu theme, but it's a shame it's so slow.