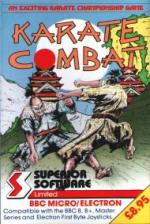 Martial arts games certainly seem to be popular at the moment, with Karate Combat from Superior Software adding to the available range on this theme.

The game follows the usual format, with the scene set against an oriental backdrop and the two players awaiting combat on the floor area. The referee sits on the sidelines, ready to issue commands and keep track of the scores.

The game provides three options - practice, single player and two players. Practice mode gives you the opportunity to knock spots off a stationary punchbag. In this mode it is possible to practise all the available moves - and there are quite a few - without the worry of being smashed to the ground by your opponent.

The single player option lets you play against a computer-controlled opponent. To see your opponent jumping, rolling and kicking with extra-ordinary speed and dexterity is enough to send you scurrying back to the practice mode.

The third option allows two players to compete against each other, which probably gives you more of a fair chance than playing against the computer.

There are sixteen different opponents, and each victory gives you a crack at a new one. If you manage to beat the final opponent, known as The Master, you can enter a draw to win a hundred pounds and a trophy.

The game may be played with either keyboard or joysticks, but using the keyboard is quite tricky due to the number of keys used to cover all the available moves. Joysticks are a much easier option. The graphics are colourful, smooth and flicker-free. Sound effects are also provided, with the option to toggle these on or off.

I can't get very excited about these martial arts games, but nevertheless this version is as good as any I have seen.

I can't get very excited about these martial arts games, but nevertheless this version is as good as any I have seen.