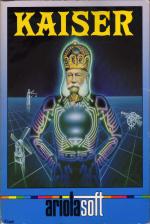 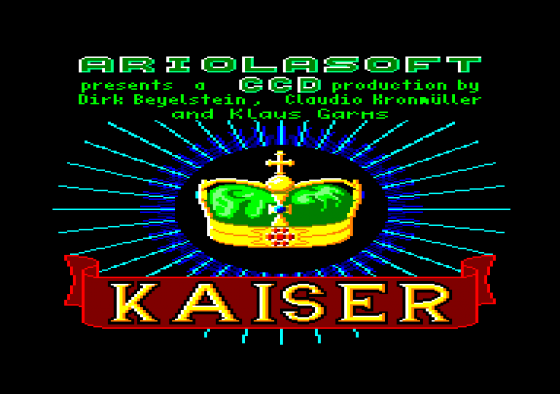 If any of you out there suffer from the strange desire to become the German Kaiser, then - to use an old computer-game-review cliche - this is the game for you. Even if you don't you wish to achieve Kaiser status, you may find something to intrigue you if you have an interest in strategy games.

Kaiser is a game for 2-9 players in which the aim is to manage land, taxes, armies etc. in order to win lebensraum and domination of the other princelings with similarly grandiose ideas. The game starts in the year 1700, so both economies and armies are fairly primitive - corn and cavalry seem to be the main factors.

After players have been assigned suit-ably Teutonic areas to rule the first screen of the turn displays details of weather, grain prices and stocks, the population's food requirements, your land and cash assets. Bearing in mind that you are obliged by treaty to furnish the peasants with a minimum of grain - and possibly more than that to keep the wretches alive - you will need to either buy or sell to get the right stocks. Naturally, buying and selling at the right time are essential. As the instructions make clear, you must 'speculate to accumulate'. If you haven't distributed enough grain, you'll find on the next screen - Statistics -that rather more people are dying in your lands than are being born. This is obviously very bad for business.

As you will see when you move on to the Budget Day screen. Here you can alter the three rates of taxation on offer. You have to find the right balance to maximize revenue. Listening to Nigel Lawson for a few tips on incentives to wealth-creation could be useful.

At this point you can also alter the 'jurisdiction' rating, shown on screen by the scales of justice. You can choose from merciful, fair, hard and severe. If you choose the first the cunning population will probably cheat your exchequer out of loot, thinking they won't be punished even if they're caught. Go for severity and you'll lose money as the peasants flee your heavy-handed 'justice'.

You can now spend money - if you've got any. On your way to Kaiserhood you'll need to expand your principality, building houses, palaces and cathedrals. But you can't build a cathedral, for example, until you've grabbed at least 25,000 acres. You'll also need huge cash reserves to back up your expansion.

Well, there's always war, isn't there? Your army is puny to begin with, but if you acquire enough cash you can recruit cavalry, artillery and infantry either from the local population or in the form of mercenaries. You'll need to take them on manoeuvres, and this will cost money.

The problem with armies is that you need a minimum size before the program will allow you to go out and wage war -unless you're a financial wizard it could take some time. Once you've started, though, treaties can be made and battles fought. The more players, the merrier the war.

Kaiser has entertaining elements but is marred by the poor graphics and unclear type used for the display. And at least two people will be needed to play it. Furthermore, it shows signs of a hasty translation from the German original: one of your taxes is the strange 'added value tax' while you are also able to 'recruite' soldiers and get 'sqadrons' of cavalry. Kaiser may appeal to strategy fans, but it's unlikely to make many converts.

I can't say I enjoyed this very much - it reminded me far too much of old Dictator games I played on a ZX81. It may have some enjoyment as a multi-player strategy game but even then it will take a lot of enthusiasm from the players parts to get much enjoyment. Much too old a game to have much appeal.

Quite fun if you've never played one of these grain-for-the-peasants efforts before. Not quite so much fun if you're paying for it - or if you've played any game written in the last five years.

P. Up to nine players can take part.
P. The scenario's different

Much too old a game to have much appeal... It may appeal to strategy fans, but it's unlikely to make many converts. 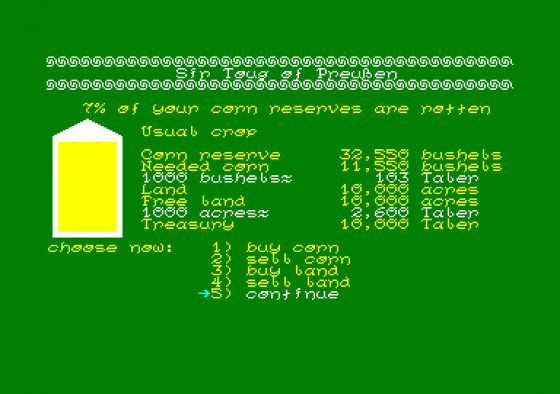