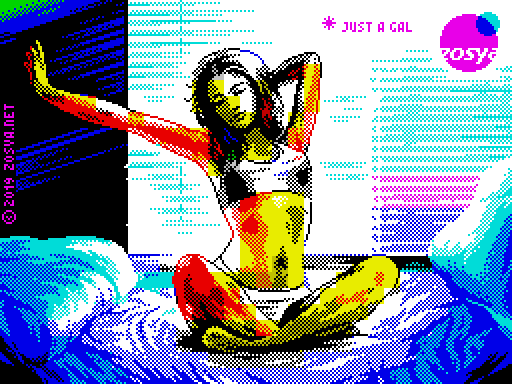 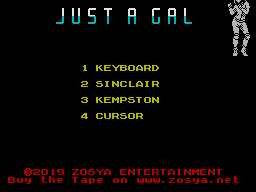 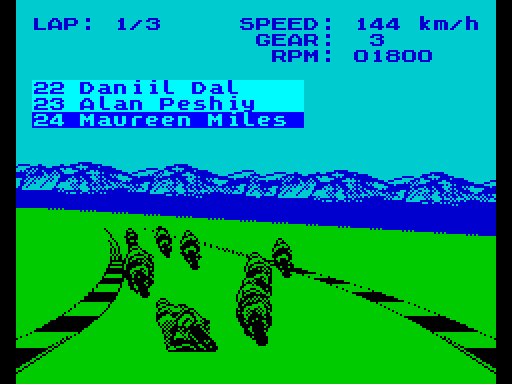 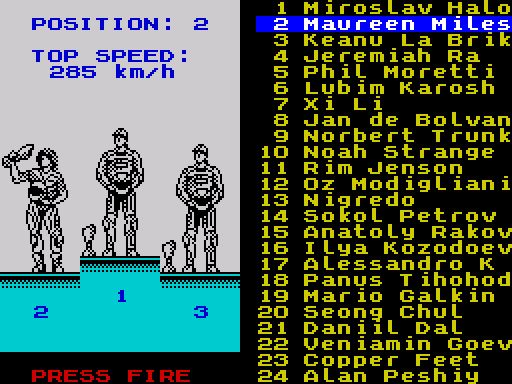 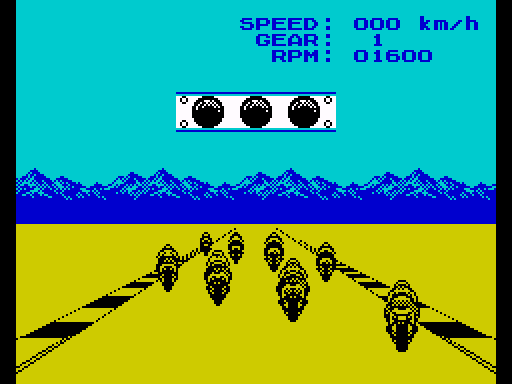 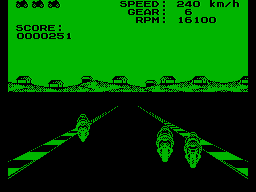 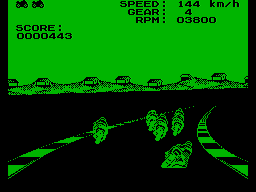 No, it's not a game based on the old depressing Abba B-side of the same name, it's actually a motorbike racing game in the style of the classic Super Hang-On. Indeed, with all racing being done in glorious monochrome, Just A Gal is a lot like the Game Boy version of Super Hang-On which I used to play on in my youth.

Now I have to confess that I don't really like racing games; I just don't have the patience to slow down and speed up when I need to. I just want to go fast all the time, which doesn't stand me in very good stead usually. However, Just A Gal does have a satisfying mode for boy racers like me. Called the Arcade mode, it dispenses with gears and leaves you free to just cruise at maximum speed, wind left and right and avoid the racetrack full of competitor bikers. Whohoo, I played this for quite a while and racked up a huge score before I lost all four lives.

The more traditional single race, and championship, game modes are however a lot more tedious. There's a false start inclusion, which means you can't accelerate before the lights go out; if you do you're dropped back to last place. And... there's only four controls: Left, Right, Acclerate and Brake. But there's also a manual gearbox. You accelerate and change gear automatically at top-speed, and if you brake, you actually just drop down a single gear. So if you want to switch from fifth to third, you need to tap the brake control twice. It feels a bit weird and I kept thinking I needed separate controls for the gear stick but, in the event, it doesn't really matter. It's almost impossible to catch up with any of the other bikers - collide with one and the bike spins out of control and that seems to about it for your chances of finishing anywhere other than in last place. Only when you reach the top speed of fifth gear do you seem to have any chance of overtaking anyone and there are so many bends in the tracks that opportunities to do so are scarce.

For me, that is, who is not much good at racing games. Those of you who love them may well find it's actually brilliant and I'm writing a load of old rubbish.

Aesthetically, it's very competently programmed: the choice pointer on the opening menus glides around smoothly and the revving motorbike and sense of speed is good, if not great. Some Out-Run style music accompanying the action would probably have given it more of a lift but, all in all, it's sort of ok, like a competent budget Codemasters title, if you're familiar with those [If you're reading this, then of course you are! - Ed].