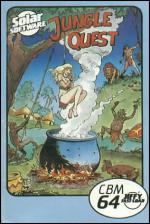 Life's tough for our jungle hero, Jim. The cannibals have captured Jane and it's down to him to save her from the cooking pot.

You're given five screens depicting the trials and tribulations Jim must suffer. The first four use scrolling to give side-to-side motion. First you must outrun a lion and avoid spears thrown from the side. In the second screen you swing on creepers, avoiding hungry plants. In the third you outswim crocodiles and in the fourth avoid boulders. In the final screen you confront the cannibals, rescue Jane and it's back to the beginning, but tougher.

To be honest, the first screen was so tough that I never managed to complete it. The graphics are colourful and quite competent. The overall flavour, however, is similar to earlier games, like Aztec Challenge.

This game is sufficiently challenging and attractive to appeal to lovers of arcade action, but if you're looking for originality, look elsewhere.

Other Commodore 64 Game Reviews By A.W.

Sufficiently challenging and attractive to appeal to lovers of arcade action, but if you're looking for originality, look elsewhere.