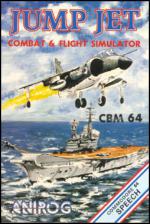 Yet another flight simulator hits the market, although this one contains speech (Anirog's own), making it different from all the others. Flying a VTOL Hawker Harrier is simulated here, with take-off and landing done from the deck of a ship (which makes it quite tricky).

To add a little spice, Anirog have introduced seek-and-destroy missions. The better you do on these, the more likely are your chances of rising through the five ranks which act as levels: Practice, Flight Lieutenant, Squadron Leader, Wing Commander, and Group Captain, being the hardest, not allowing you to make many mistakes. Also the weather conditions decrease through the ranks, starting off with calm weather on the practice level and ending on Group Captain with stormy weather and mountainous seas.

When you first start the simulation you are put on the deck of the ship. The screen shows a view from above the ship, with your plane on deck. Once you have lifted into the air the screen splits into two, showing a side and an above view of the ship with your instrument panel at the bottom; thus making take-off a lot easier. Once you are clear of the deck, the simulator reverts to the usual view through the cockpit window.

Take-off itself isn't too hard, simply move the engine thrusters downwards and increase thrust to its maximum. When you have taken off you will hover over the ship. Move thruster engines to 45 degrees and you will fly clear of the ship. Once you are well clear, put the thrusters to horizontal and you can start flying.

There is always an enemy plane within a certain distance of the ship, lock your radar onto it and switch on your missiles and machine guns. Once you have it in sight you can shoot it down (not too easy since the plane twists and turns to avoid you). When you have completed your mission you must find the ship and land your plane to refuel and take on more missiles. Quite a difficult operation is this one and prepare yourself for many pancakings before being able to land properly!

The instrument panel contains what you need to fly a Jump Jet. There is the usual speed indicator, bearing meter, fuel gauge, altimeter, flap and gear condition, and power meter. There is also the radar which shows your ship and enemy planes, a panel to show which way your thrusters are pointing, number of missiles carried, an artificial horizon, warning total, and elapsed mission time.

There are several ways of failing to complete the mission. Obviously crashing your plane will finish the mission (and you), colliding or being shot down by an enemy plane and crashing on deck are other untidy ways to go. There are also warnings given for bad flying. On the practice you are allowed unlimited warnings, but throughout the ratings they decrease down to three. When a warning is given, a beep will sound. If you aren't on the practice level then one warning will be added to your total. Too many warnings and you'll be forced to bail out. You can pick up warnings for making seven different types of mistakes, so on high levels very careful flying with much concentration is needed.

I'm not too keen on flight simulators and this one consolidated the fact that there are far more exciting programs on the market. There were quite a few bad points about it, like the horizon not tilting and the control of the aircraft itself, which seemed too quick to respond to movement, especially while hovering over the deck when one tap on the joystick sent the plane yawing. The graphics are reasonable as far as instrumentation goes, but failed to convince me that I was really flying something as complex as a Harrier. Program content seemed a little flabby, too, although once having taken off successfully some of the missions hot things up a bit. It's a shame that Anirog couldn't have produced a flight sim to match the high quality music on the title screen.

Although scoring high on having an original approach, this is only just above average for a flight simulator. The graphics are mediocre with the terrible mistake of not having programmed the horizon to tilt when you bank. Although having a great little tune on the title screen, the sound reverts to a rather grating whistle, but this is made up for in the speech synthesis which, although not digitized, is of quite high quality. It's a pity Anirog couldn't have used the jet noises from Raid Over Moscow. The idea of having the two views of the ship when landing and taking off is both great and necessary. It would be terribly hard to land on a carrier using a normal view. Even with its niggling points, this is quite a good little flight simulator and offers a great challenge even on the lowest levels, and definitely rises above most Jet simulators on the market.

To be honest, I am not a great fan of straightforward flight simulations, such as Anirog's previous offering Flight Path 737. Jump Jet has some similarities to 737 such as the disorienting lack of tilted scenery when banking the aircraft, a fine piece of music on the title screen and distinct lack of realism. There was no real feeling of flight during play because of the 'static' graphics, and I found myself becoming bored very easily. It does have plenty of flight controls (mainly from the keyboard) for you to keep your eye on, which does give you something to do, but I do feel that flight simulators need to offer something more exacting and demanding on the player's skills, and not just his eyes, as this game does.

Hookability 48%
Not easy to get to grips with.

Value For Money 42%
Below average game at above average price.

Overall 42%
Probably won't even appeal to the average armchair pilot.

Probably won't even appeal to the average armchair pilot. Below average game at above average price.