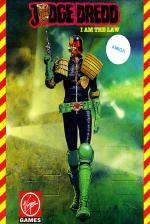 The symbol of the 80's revival of British comics, Judge Dredd is the sort of character who wouldn't look out of place in Speedball II. In short, Dredd is psychopathic, brutal and bloodthirsty. His beat is Mega-City One in 2023, an American metropolis with a population of no less than 400 million. This authoritarian nightmare suffers a suicide every 45 seconds and an ever increasing crime rate - hence the judges who can administer 'instant justice' at the point of a gun. For the average citizen fear of crime and fear of this 'justice' are about even.

The computer game consists of six adventures. Each consists of a city block presented in side-on fashion with a maze series of platforms and ramps to explore. Dredd can move about on foot, or by bike if you press Space. The Lawmaster bike is obviously the fastest way to travel, but Dredd can't shoot from it. On foot Dredd is armed with a pistol which can fire ordinary bullets, homing missiles or a high-powered laser (which cuts through a whole line of people). The latter two have limited ammo and can be picked up; you can select missiles but the laser stays on until it runs out. This can be a problem when criminals get mixed up with civilians: every innocent you kill increases the crime wave bar - when this hits maximum it's game over. You can also die if energy falls to zero.

To complete a level, Dredd must find the four special objects scattered around - deactivated by walking by them - before heading for the exit. The end-level confrontation varies according to the adventure: on level one Dredd must leap from carriage to carriage on a food convoy, on level two a mad scientist must be shot, and level five features a jetbike chase.

The six adventures draw obvious inspiration from the comics: level two's Fibbs Lab and five's Blockmania are based on specific stories.

Random Access have done a string of good conversions so hopes were high for a licence like Dredd where they had freedom to develop some original gameplay. Sadly about the only mildly original aspect is the varied end-level confrontation subgames which, in the event, aren't that great.

Worse, the main gameplay is to tedious and so difficult on the Amiga that Virgin have supplied a map showing the location of the vital objects! This map doesn't work on the C64, which is marginally more playable with a more controllable crime rate (on the Amiga it shoots up so fast a single mistake can be fatal!).

The C64 also has superior graphics and remembers the location of baddies when you switch between bike and man - on the Amiga the characters are scrambled so getting off your bike to shoot someone is often pointless (and extremely irritating!).

Judge Dredd has been the only surviving character from 2000AD's early years, and to my mind is as strong a character/image as Robo himself.

Unfortunately, Virgin do have a habit of mucking up the licence; the first game failed miserably and the second barely holds it head above water, the simplistic gameplay not doing the game any favours.

Different missions appeal with graphic and objective variety but there's a lot of wandering around involved, and it can be an annoyingly long haul to get anywhere; make one mistake and that's it.

For use of machine, the C64 game comes out on top: Dredd is a good looking sprite, the falling fatties are a laugh and the backdrops look slightly grimier/authentic than the 16-bit Mega City One - they just haven't tried on the Amiga.

I enjoyed the C64 game because at least you are given a chance - the frustration factor of the Amiga game seems to be set to max, and I'm not playing it again!

Presentation 78%
Blocky cartoon-style screens when you die/call up bike, etc, intro for each level and good multi-load.

Hookability 62%
Quite a bit of shooting makes for an appealing start...

Lastability 48%
...but the repetition of gameplay discourages long-term play.

Overall 53%
For dedicated Dredd fans only.

Hookability 48%
Tough to begin with...

Lastability 34%
...and repetitive over the longer term.

A mediocre offering, though Dredd is a good looking sprite, and the falling fatties are a laugh. 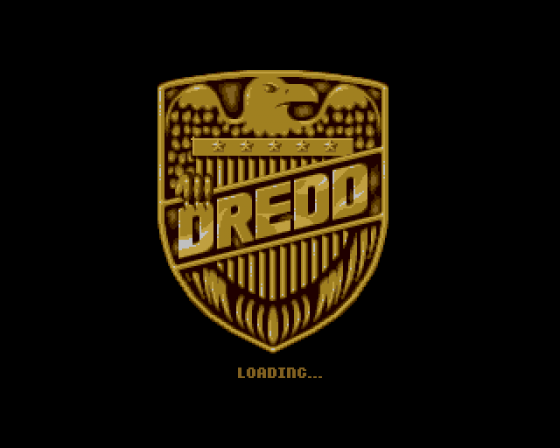 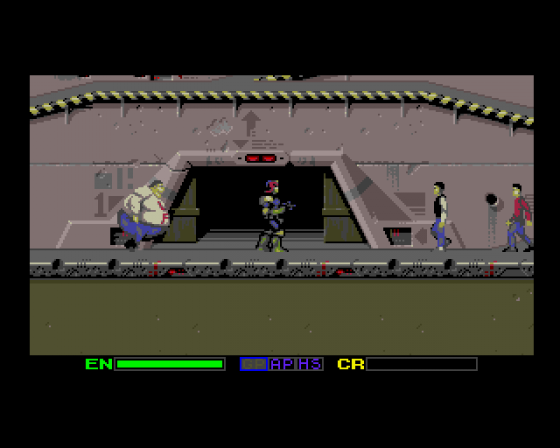 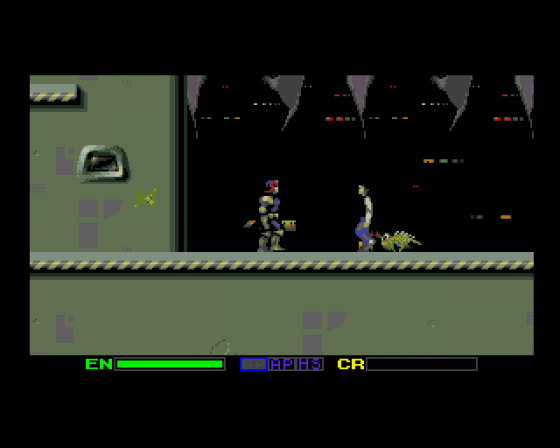 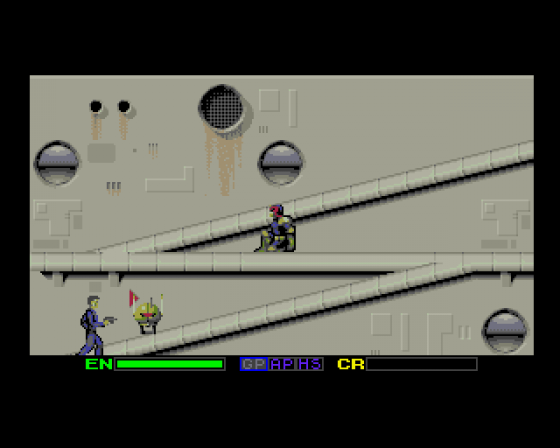