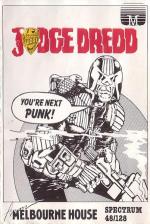 Dredd has been a long time coming, unusual in one of such tempestuous certitude. It must be over two years ago that GAMES WORKSHOP confided they were developing a computer game based on the cult 2000 AD comic-strip hero - but the Workshop stopped producing software. Dredd then moved surreptitiously over to MELBOURNE House some months later, and their game has been many moons in the making.

The time is the future; a postpunk, post-industrial world, where the minority managers run automated factories and write the laws, while the teeming masses celebrate their terminal boredom in crimes ranging from petty to megalomaniac. The law is unforgiving - In Mega-City 1 the equivalent of being hung for stealing a loaf is to be shot for jay-walking, presumably because you shouldn't get in the way of a busy, car-bound manager.

Meanest of all the Judges is Dredd, a man-myth who wears his beliefs in a holster.

MELBOURNE HOUSE now offers you the chance of a few hours inside Dredd's death-black armour, astride his Lawmaster motorcycle, and with his faithful Lawgivet strapped to your side, in the eternal hunting down of perpetrators (or 'perps') who threaten Mega-City 1 with anarchy and destruction. Moving through city streets on foot is considered an A 7 risk, so Dredd, following basic procedures as laid down in the Justice Department Regulations, prowls his sector on his Lawmaster. From this mobile position, monitoring crimes as they're reported on the crime display screen is simplicity itself. By moving an icon (representing himself) over a reported incident on the display and pressing fire. Dredd is whisked to the incident - and dismounts.

The game now switches to a side-on-view platform game. A status panel below the playing area offers three selectable readouts. The first shows remaining levels of stamina and ammunition, and also states the Judge's response; three may be selected. Halt is a shouted warning, Warn fires a shot across the perp's bows, while Kill speaks violently for itself.

Dredd moves from screen to screen by running along platforms and jumpping up or down. Alternatively, lifts and doorways may be used to reach the last known position of the peril and bring him to book. In responding to Halt or Warn, the perp sticks his hands in the air and 'comes quietly'. But should Johnny chance his arm, it's out with Lawgiver-and BADAAM! When the crime is first selected on the crime display, its 'normal ' level of threat is set for Dredd, but some perps are more desperate (or foolish) than others and the Lawgiver is designed accordingly.

As Dredd deals with one crime, others are continually being perpetrated, so having dealt successfully with one, it's back to the crime display to check on progress throughout the sector. Should there ever be more than eight crimes on screen at once, the game is over and the criminals have overrun the city.

'If you are a regular CRASH reader you may have noticed that we have a great liking for 2000 AD and its characters. I am EXTREMELY DISAPPOINTED with this awful effort. Judge Dredd had potential to be one of the strongest characters ever to appear in a computer game; unfortunately the situation here cramps his style. The game has been badly planned and abysmally programmed, It's hard to play and eventually repellant I'm afraid that this does no Justice to the original cult cartoon strip whatsoever - stay well clear of it.'

'Judge Dredd seems to be in the same vein as V, both look pretty but are boring to play. Some of the characters are well drawn, but none are solid enough to resemble humans. The game has no music, the sound effects are poor variations on simple white noise. The key-define section is badly thought out - defining separate keys for moving diagonal is outdated. I can't see Judge Dredd appealing to 2000 AD readers because It isn't half as much fun as the comic strip.'

'Judge Dredd isn't all that bad - though I didn't like it much at first playing. Later on I started to get into it, and it became more playable. Unfortunately, by that time, it wasn't long before it became boring. The graphics aren't up to much, but they serve their purpose. Dealing with the different crimes in different ways is initially quite enjoyable, but the game's staying power is limited. Sorry MELBOURNE HOUSE, but I reckon that I would find 20 copies of 2000 AD much better value for money.'

Dealing with the different crimes in different ways is initially quite enjoyable, but the game's staying power is limited.