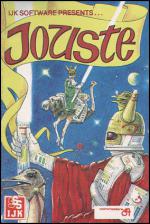 How else can I describe this game but as a very nice version of a fairly popular arcade game?

The screen contains several rock platforms at various heights, at the bottom there is a wide island surrounded by molten lava.

You are an ostrich type of animal with a long lance. The object of the game is to jouste creatures like yourself with your lance and turn them into eggs. The eggs will then roll and land on a platform where you can collect them. If you do not collect the eggs straight away they will turn into lava trolls.

In a similar way you must not let anything land on you or else you will suffer similar consequences. Occasionally a pterodactyl will fly onto the screen. These are very unpredictable and dangerous.

Controlling the game is made very realistic with the inclusion of inertia and gravity. A joystick must be used to play.

The graphics and movement are of an extremely high standard. In many respects they are almost as good as the original arcade game. The only limitation is the computer's screen size and resolution. The sounds are not very exciting but this is also true of the arcade version.

I feel that a little bit more effort could have been put into the instructions printed on the inlay card. As it happens there is a demo routine included which does show you the principles involved and can help if you are totally bemused by the game.

The graphics and movement are of an extremely high standard.