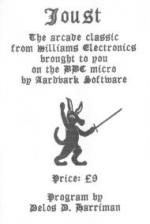 Some people just don't have any luck! Take the case of Delos D. Harriman, for instance. Back in 1984 he produced a stunning version of the arcade classic Joust for copyright holders Atari - exit Atarisoft after producing a small handful of arcade conversions. Enter (in 1985) Aardvark Software, well-known showcase for the brilliant if unprolific talent of one Orlando (Frak!, Zalaga, etc). A bit of conversion and tidying up and the game was ready for an unsuspecting world.

Then, disaster! Aardvark seemed to disappear and this masterpiece was left to languish once more, unknown but to a few games freaks. Finally, a despairing Harriman resorted to trying to sell the game through a small ad on Micronet (MBX M.Fox on 919999020 for full details). Enter A&B and the game gets its true reward: Game of the Month!

As well as being an accurate conversion of the arcade hit (as far as I can remember), the game scores well by incorporating all sorts of clever and welcome extras like the windows on the title screen with a countdown of loading time and nicely scrolling instructions. Accuracy is stunning: a pixel-for-pixel copy of the original written with the help of the original programmer, Williams.

The idea of the game is simple - you control a flying bird and must joust in the air with either another player or the computer, the loser turning into a harmless bird laying an egg that can gain extra points. Yet, with all such simple ideas, the gameplay is complex and subsequent screens gain infuriatingly in complexity, speed and difficulty. Those who played the original arcade game will recall the Bounders, Hunters, Shadow Lords, Larva Troll, hatching eggs and Team, Gladiator and Egg Waves - well, they're all here!

What raises the game well above the usual level is the option for two player games - not just competitively as in many games but in co-operation against the computer. An added delight is the computer's random announcement of a 3,000 point bonus for the first player to kill the other! In games like this, you need to know who your friends are!

With joystick, redefinable keyboard or joystick and keyboard options, this is a model of how a game can be made a real pleasure to play. As a single player game it is a well-designed and compulsive challenge; as a dual game, especially in a group of friends, it takes on a whole new depth where your baser natures can take over.

Great game, great programming; now let's just hope it gets the success that is more than a little overdue.

Great game, great programming; now let's just hope it gets the success that is more than a little overdue.