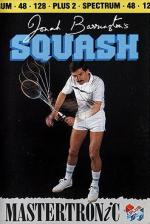 Not all oldies are mouldies, though - this game dates from 1985 and is still superbly playable. I'd never seen it at all until a couple of years ago, when YS did a feature on sports sims and I had to play all of them. I was amazed at how good It was, even though it was a little basic (if not Basic). I suspect that Mastertronic, with this 79th rerelease, has tarted it up perhaps a touch, but it remains not only the best squash simulation iVe ever played, but the only one, as far as I'm aware. Why else has no-one ever tried to repeat the trick? It can only be because this one is quite good enough. Buy it and try it - it's hard but not too hard, and it's very, very simple in presentation and structure. Let's not knock simplicity - Jonah Barrington's Squash remains a classic.

Buy it and try it - it's hard but not too hard, and it's very, very simple in presentation and structure.