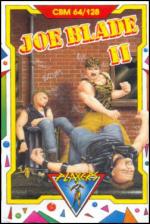 Super mega-hard man, Joe Blade, has returned to his home city after finishing his army duties, but is not happy to find that it isn't safe for people to walk the streets any more. Even in their own homes, the citizens live in fear. Joe decides that something must be done and sets off to put an end to the villains' reign.

You take the part of Joe, and must walk the streets taking out the punks by kicking them in the head. As well as duffing up the thugs, you must rescue sixteen citizens by solving a series of sub-games which involve you rearranging a sequence of numbers.

If you can manage to complete your mission, then you can be proclaimed a suitably hard "maaaaaan".

You start off playing this by thinking, "this is a bit of all right"; but when your go gets to about five minutes long, you begin to wonder what's going on. What have they done to one of my favourite budget heroes? Waaah!

It's all very much the same as the original Joe Blade game, except the baddies are in casual gear and prison walls have been replaced by city walls. This wouldn't be so bad, but the game's far too easy - and that's not really on - not even at this price.

I enjoyed playing the original Joe Blade quite a bit and to this day I haven't quite completed it, so when the sequel arrived, I expected to play a good, challenging game.

However, after reading the instructions, I sat down to my second game and promptly completed the mission, as I've managed to do every time since. Now this to me doesn't make for a challenging and addictive game.

On the other hand the graphics are okay, and the music is quite good, but anyone with a bit of spare time could watch a demo with neat sound and graphics and be two quid better off.

Presentation 69%
High score table and neat layout, but no options.

Sound 76%
Decent enough tunes but no sound effects at all.

Hookability 62%
Easy enough to get into - and fun for a while.

Lastability 15%
So easy to complete it's ridiculous!

Overall 38%
Fun for a very short while.

All very much the same as Joe Blade... but it's far too easy - and that's not really on - not even at this price.