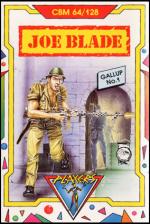 Who do you send in when six world leaders have been captured by the deadly Crax Bloodfinger and are held ransom for 30 billion dollars? Joe Blade, that's who!

Joe has to infiltrate Bloodfinger's HQ and retrieve the hostages from the terrorists' grip. The stronghold is full of Bloodfinger's armed troops - to make matters worse, there are six booby-trapped devices that must be found and activated, thus allowing only twenty minutes for completion of the mission. To set the explosives, the letters A, B, C, D and E must be rearranged into their correct sequence within a time limit - an infrequent, but enjoyable, task. However, failing to complete this results in Joe's termination and the end of the game.

Gaining access to the base's latter sections is only made possible by collecting the keys that are scattered along the way, and the fortress has many rooms and corridors, so mapping is essential.

Joe Blade is a fairly simplistic shoot-'n-search game, but it's made really enjoyable by the pleasant graphics and almost humorous gameplay. Definitely one for the collection.

A fairly simplistic shoot-'n-search game, but it's made really enjoyable by the pleasant graphics and almost humorous gameplay. Definitely one for the collection.