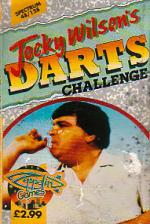 Any sport in which the participants are generally fat, ugly and full of beer is my sort of sport, and personally I do like a game of 'arrers.' Spec-chums seem to as well, 'cos about eight billion darts sims have come out over the years, the latest of which appears with a photo of Jocky Wilson on the front. And as we all know, there's no one fatter, uglier or fuller of beer than Jocky.

Appropriately this one's on the Zeppelin label, since that is the form of air transport that Jocky most resembles, and it's really rather fun. Like the real thing there's actually some skill required here, as you try and bung in treble twenty after treble twenty, and inevitably score three.

You can play tournament (up to four players and great fun), head-to-head (useful to have someone else to play this with) or round the clock, which is a race against time. It's not too easy to see where young Jocky fits into it all, but so what? It's good fun anyway, with excellent graphics and well thought out gameplay. Only the shockingly bad and incomprehensible instructions let it down.

It's not too easy to see where young Jocky fits into it all, but so what? It's good fun anyway, with excellent graphics and well thought out gameplay.