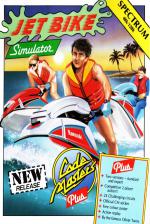 Racing cars. BMX bikes. Go-karts. Skateboards, What is there left to write a circuit-racing game around?

Just transfer the same scenario to the water, and the solution's obvious. Yachts. Speedboats. Rowing boats. Pedalos. Oh, I know - those zippy how-long-can-you-manage-to-stay-on jet bikes. Bash out the backgrounds, change the speech samples and there you are.

JBS comes as the first offering on the new Codemasters+ label and we know what '+' means don't we? More money. JBS costs £4.99. There are 24 courses spread across two tapes. Perceived value for money? More on that later.

If anything. Jet Bike Simulator features even more detailed backgrounds, and as a result even tinier and less detailed sprites, than the Oliver Twins' previous hit Grand Prix Simulator.

The only real difference is that when you're steering a jetbike, you can't use the forces of friction to keep you on the course as you scream around a corner - try it here, and you'll end up banging into a schooner. No brakes, of course - thrust, left and right. There are two versions of the game on the tapes. The difficult Expert version allows you to see all the courses before you play. On the easier version, each one comes as an unpleasant surprise.

There are three groups of eight courses - docks, lakes and coastline. The complexity of the courses, the of obstacles and the tightness of the turns obviously increase as you move on.

On each course, the aim is to complete it within a set time limit, racing against two drone bikes and one which is controlled by another player, or the computer. Each course features several sets of buoys (unfair to gurls) which you have to steer between in the correct order. As you zoom along, a trail of bubbles spreads behind you. If you get stuck behind all three opponents you'll practically lose sight of your bike.

At the end of each level there's a score table which gives your lap time, those of your competitors, and your position.

The sound effects are of the plip-plip-plip variety, and the collision detection is a bit dodgy. Try to shave past a buoy, and you'll more than likely bounce off invisible underwater obstruction.

Jet Bike Simulator in a two-cassette pack with a poster and a sticker at £4.99. It's a price level for the software industry, and it will be interesting see whether Codemasters can establish it.

Is Jet Bike Simulator the money? Well, it's basically a "remix" of the ideas conatined in Grand Prix Simulator. If you're the type buys extended, remixed, disco dance versions of chart records, then you might be the type who'll buy Jet Bike. I'm a great remix merchant myself, but then I'm stupid.

Difficult to decide whether this self-derivative game deserves a look at this price point. A lot of it, but it's a new 'budget' price.

Difficult to decide whether this self-derivative game deserves a look at this price point. A lot of it, but it's a new 'budget' price.