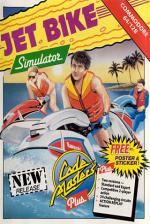 'Ave yer seen it? 'Ave yer? That ace program Run The Gauntlet, you know, the one where they race about on them Jet-Ski things. Ever thought to yourself 'I wouldn't mind having a go at that' but been too nervous of getting wet? Well, now you can have a go without going near any water with Jet Bike Simulator.

It's a race between four riders (one or two controlled by human players) over a number of set courses. These range from lake, coastline and dockland courses, through which you steer your craft, negotiating bridges, jumps and gates. Each course must be completed within the time limit to allow access to the next, harder level.

I played this on the Spectrum when it was in the £4.99 range (OK I admit it, I have played one of them gadgi Spectrum machines) and as far as I'm concerned, there's been no real advance on the gameplay it offered then.

If this has been released at Code Masters' new budget price of £2.99, it would have got a mark in the 80s; for almost a tenner it's just about passable.

If you've got the money to burn, check it out; if not, forget it.

Code Masters Plus? Plus what? Is it the bigger box? Well, it's certainly not quality if this is anything to go by.

It's just BMX Simulator with worse graphics and an extra course tape. One of BMX Simulator's good points was its cheap price - but Jet Bike Simulator hasn't even got that, which is sad really, as it would have made quite a nice little budget game.

Nine pounds for a simplistic racing game is way overboard.

Presentation 59%
A few decent options and a choice of courses but the general appearance is shabby.

Graphics 40%
Flat backgrounds and piddly little sprites with far from the best of colour schemes.

Hookability 56%
Hardly the most compulsive of race games, but it's quite good fun with a couple of players.

Lastability 31%
The additional courses and expert version may extend its longevity slightly.

Overall 39%
Bland, and almost seven quid too much.