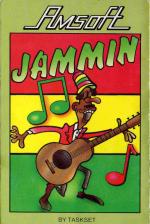 From my first sight of the first screen I sat bolt upright - the display being different to any other I have seen.

Moving walkways criss-cross the screen and there are 20 of them to tackle.,; well there would be if the publishers had put more than minimal effort into their quality control.

At last it seems that someone has been sufficiently creative to program an original idea. The program is a conversion, although new to me, and I have seen most Amstrad games.

Full use has been made of the Amstrad graphic and sound facilities, which are terrific in stereo.

In the style of a Dutch auction the screens are numbered down from 20, so the second one is number 19. Screen 18 is where the publisher's familiarity with the program becomes contemptuous. The first time I got to this stage the game just locked up. Rankin' Rodney was petrified.

I had found a Bug.

Another attempt caused black squares to appear on the display, with odd black pixels peeping through the paper colour. Nothing if not tenacious, I tried again, this time a full reset was initiated ... ready.

Had the screens run in the more usual way from I to 20 I may never have discovered this garbage. It concerns me to think that you would have wasted your money, with frightening repercussions.

Full use has been made of the Amstrad graphic and sound facilities, which are terrific in stereo. However, the game appears to be badly bugged.