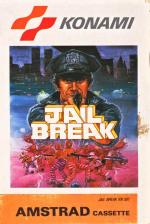 Konami is the coin-op giant that has been licensing its games through Imagine/The Edge for a couple of years now, but has recently set up shop for itself. Jailbreak is the first result of their efforts, with games like Nemesis and Salamander to follow. However, looking at Jailbreak my hopes of seeing good conversions of these is rapidly fading.

The game is based on the coin-op Konami game of eighteen months ago. You play a cop who, single handed, is trying to stop a mass breakout from the local nick. These escaped convicts wander across the screen shooting at you, talking hostages, and generally making a nuisance of themselves. Later on, they get extra weapons and start taking over vehicles. You can get extra weapons (grenade launcher, bazooka, etc) to defend yourself against them as well.

The game worked well in the arcades because it was fairly simple, had detailed graphics, and was quite quick. The fashion at the time was also towards games of extreme violence and little gameplay. The present trend in computer games, however, is somewhat different to this. Because of this the game has an old feel to it. The mindless killing of yesterday's martial arts games comes to mind as the minimal gameplay gets more and more boring.

The Amstrad conversion is not inspiring, the small graphics jerk around the screen. The screen is smaller than normal to get the aspect right, and the medium resolution mode has been used - which means little colour. All in all, an average conversion of a dated game. These go together to make the game not worth getting at all.

I don't normally comment on the packaging, but I'll make an exception in this case. It is the boring old standard Japanese way of packaging in a cardboard box that doesn't stack and doesn't fit in anywhere. It looks like something out of the old MSX days.

An average conversion of a dated game. The Amstrad conversion is not inspiring, the small graphics jerk around the screen.