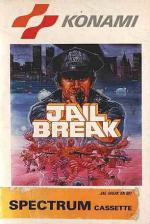 Pee-oww! Pee-oww! Akka-akka-akka! Emergency! Jail break! Th warden has been taken hostage! Along with half the town. Quick - give that PC a pistol. This no time for community policing!

If the arcade king was ever crowned, Konami would be a sure front-runner. It's no stranger to our Spectrum's, either, with conversions courtesy of Ocean and the rest, But now the company's got it together and started its own software label.

Jail Break's a test of frantic firepower as your sole cop strolls along the mean streets, picking off escapees and picking up hostages, for which he gets extra weapons.

But one shot wrong and your arsenal's slimmed back down to your shooter. The public doesn't take kindly to the accidental annihilation of cute little old ladies, the lily-livered crew. You'd think they'd never seen a Dirty Harry movie!

The extra armoury consists of a rocket gun, which is a pocket weapon - if you've got very large pockets! - and tear gas bombs. What with the criminals building barricades and taking hostages in buildings as well as on the streets, you'll need both of these to reach the warden.

This could provide a few hours of innocent, bloody amusement, but for the fact that the conversion isn't quite good enough - it lacks polish. For instance there's a character who sometimes appears from behind you at the start, who's almost impossible to avoid - and there are few things more annoying than the ISDS (Initial Sudden Death Syndrome).

There also appears to be some confusion in the collision detection. You may think you're going to slide by that savage brute, but the computer says not. If only your cop moved a little faster, you could get out of the way, but he doesn't appear to be in a hurry.

Konami has lots of great games to draw on, and is sure to get it right in the future, but this gets shot-down by the opposition.

Konami has lots of great games to draw on, and is sure to get it right in the future, but this gets shot-down by the opposition.