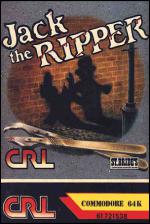 The year is 1888, and London town is in the midst of a wave of murderous crimes, most of which have been blamed on one man, christened by the popular press as The Ripper. It's into his shoes that the player is placed. The discovery of a mutilated female body is the opening sequence, one which the player can't avoid.

In fact, there are several scenarios which the player is guided through without much interaction on his part. These are very atmospheric and even quite exciting to read, but if this is all I wanted to do, a book would have sufficed. Fortunately, the game comes in three parts and there is sufficient interaction within them to appease most of us text input addicts.

When the player gains some control over his fate he finds that the action is played in 'real time', and therefore decisions have to be made quickly and accurately. This is no hardship really, as there is a RAMSAVE facility, but it doesn't allow for too many wrong moves. Most of the action seems to be taken up covering one's tracks and moving from place to place as quickly as possible without being discovered by the local Peelers, who are soon hot on the Ripper's trail.

The location, event and object descriptions remind me of the adventures created by a certain Rod Pike, but as I quite like his games and the St Brides ladies emulate his style competently, Jack The Ripper works very well for me. The topic isn't overflowing in taste, and some of the graphics are unnecessary, but the style of the text coupled with the atmosphere and excitement created all add up to making it a must for the adventurer's collection. You are over eighteen though, aren't you?

The topic isn't overflowing in taste, and some of the gory graphics are unnecessary, but the style of the text coupled with the atmosphere and excitement created all add up to making it a must for the adventurer's collection.