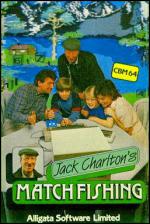 This unconventional game is the computer version of the very popular fishing board game in which the player competes against other human players rather than the computer.

The program simulates a day out match fishing beside a very attractive lake (the scene was designed by loading screen designer, David Thorpe). The game caters up for up to eight anglers, all of whom must enter their names at the start.

The contest may last for anything between 1 and 90 minutes, the desired length being entered at the start. Once under way, each player is allocated a 'peg number' around the lake's edge and is given detailed descriptions of the conditions of the bank and surrounding waters. For example, the player might be told: the section has two large trees adjacent to the peg and water, which is only between seven and twenty feet deep and has a lot of leaves and twigs on the surface. To a non-angler, this might suggest the use of a luminous hook and a torch, but whatever tackle you decide on, you must choose the most appropriate from the tackle section.

A choice of rods, floats, reels, lines, baits, and hooks is offered. At this stage you must specify the type of cast - strong, medium, or weak. When all of the players have selected what they assume to be the most appropriate tackle, the game moves onto the actual fishing.

A page of instructions explains that all of the contestants must gather round the computer. They will be shown a picture of the lake with the eight pegs around it. When a player's peg flashes, it means that a fish has taken the bait and the player who's peg it is must dash to the computer and press the appropriate number to strike. At any stage during the wait you can ask to see your peg description and change tackle if required.

At the conclusion of the selected period of fishing, the results are displayed. Each player's catch is displayed in an order dependent on the total weight of fish caught. After which it's down to the local boozer for a few pints and the traditionally furious arguments about the ones that got away.

Angling isn't, I know, everyone's cup of tea, and yet it is the most successfully enjoyed sport in Britain. As a matter of fact, I don't mind the odd hour or two spent on the bankside of some rivers around here. Match Fishing is actually quite a successful implementation of the sport - not an easy one to translate to the computer, and here they have done it with reasonable elegance. Quite clearly, this program isn't going to have the wide appeal of say a Dropzone, but if you are keen on fishing then this should fit the bill nicely, and it especially comes into its own with several players competing. The version I saw allowed rather easy access to the BASIC program, and error trapping could have been better, but Alligata say there have been considerable improvements on that score since. While I am interested in fishing, I do not consider myself an expert but the game certainly seemed to pose the sort of problems that any match fisherman would have to face. Interesting for anglers.

Sound 2%
Apart from occasional beep, there isn't any - riverside quiet!

Hookability 64%
Easy enough to get into and fun in a group.

Lastability 72%
If you like it, you're going to play for quite a while.

Overall 70%
An interesting game to be commended for trying something new, probably has limited appeal for those who prefer making a lot of noise on the river bank.

An interesting game to be commended for trying something new; probably has limited appeal for those who prefer making a lot of noise on the river bank.