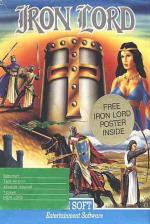 C'est formidable! That's the only way to describe the latest game to cross the channel and we have it hotfoot (or hotwing), all the way from la belle Paris courtesy of UBISOFT. In Ironlord, you take the role of a young French knight who, upon his triumphant return to his homeland after long crusades, finds that things are not quite the way he remembers them and a few changes have taken place. We're not talking a few Wimpey starter homes that have suddenly sprung up - Ph no siree! We're talking BIG family trouble. His father, has been deposed from the throne by none other than his crafty old uncle. This is a fairly serious state of affairs as it puts our poor hero right out of the family business.

It's all too much! All our hero's job opportunities are dashed and he frms a plan of action based upon his current skills. He will raise an army from amongst the massed, unwashed ranks of the local surfs and depose regain his former standing by giving him a good going over.

And so the scene is set. The die is cast. The plot unfolds... To raise an army he must travel the kingdom and stir the locals into a fever of rage and honor as they rally to his cause. Unfortunately, the locals couldn't be stirred with a five foot teaspoon as they all have their own small problems and you must direct the knight's actions so as to gain their trust and respect by helping them in their particular needs.

Iron Lord unfolds as an adventure/strategy/arcade game and as you travel around this countryside, you will interact with key members of the various communities and from time to time get drawn into one of the four arcade sequences that consist of an archery contest, arm wrestling, gambling with dice and just having a jolly good fight.

Each of these sections is masterfully handled with line graphics and plenty of colour (there's a novelty).

Although it's been a long time in the making Ironlord has made the cross-channel trip successfully. We're just glad there weren't any sub-titles.

Although it's been a long time in the making, Iron Lord has made the cross-channel trip successfully.