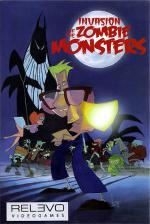 Invasion Of The Zombie Monsters

Available at last, Relevo Videogames' Invasion Of The Zombie Monsters has been a whopping four years in production and has finally been released with slightly different versions for the Amstrad CPC, Spectrum and MSX. It's been reviewed elsewhere and given lavish amounts of praise. Alas, I don't like it.

You play Ned, who can run, jump, crouch and shoot in a game that is incredibly similar to the classic Ghouls 'N Ghosts. It has the difficulty level to match that game too. In fact, it's practically the same game, with exactly the same issues that plagued the original.

The three versions of it are slightly different-looking, but all do look very nice. Graphics are amazing, music is cool and character and background design is inventive. The physical versions also come supplied in a snazzy, professionally printed box with a manual and cassette/disk to match.

All seems very promising. Until, that is, you start to play it. Because Zombie Monsters is not a question of simply avoiding or shooting the numerous monsters; you must also remember the layout of the stage itself.

The game involves Ned running from left to right; the screen scrolls (jerkily) when Ned reaches the centre of it. Zombies, however, appear from the right, often on a collision course with him. If you keep Ned running, he'll collide with them faster. If you don't, then you have only a half-screen's reaction time between seeing them and needing to hit them with the release of a well-timed bullet.

If you do successfully shoot a zombie, it explodes in a ball of flames. However, some of them require more than one hit and therefore may require Ned to run away from them first and then turn around, simply to be assured of having the time to fire off the requisite number of shots.

Zombie Monsters also involves the Rick Dangerous style of gameplay, whereby you have to become intimately acquainted with all of its stages in order to clear them. Unless you have a photographic memory and can remember exactly which zombies are about to appear at which points of the game, you end up running away from practically every zombie that appears - then gently nudging Ned to the right rather than running.

Combining the two elements, you end up treating Zombie Monsters with too much trepidation. The easiest way of surviving is to take very small steps to the fire, whilst constantly firing in case a zombie is going to appear...!

My instinct says that this is not the game that Relevo Videogames set out to make. Because, even employing such a strategy, the game is tremendously unfair. When it knows you will be at your most distracted, i.e. busy jumping from one bridge to another, it chucks a load of ducking and diving monsters at you to make the operation as hard as possible.

There's also the "eight pixels at a time" scrolling. This is a real passion-killer, with monsters and bullets (whether fired by you or the monsters!) glitching rather than flowing across the screen. Contact with either of them leads to an inevitable death and, on many occasions, although I did hit the jump key, Ned was hit before he reacted!

When you die, you're sent all the way back to the beginning of that stage. So the sad reality of Zombie Monsters is that most people won't see further than the first stage unless they enable a cheat. A game does not need to be this challenging; if Ned could withstand three hits before dying, for example, this would have resulted in much less of my swearing and tearing out my own hair.

And finally, the manual for Zombie Monsters appears to have been translated directly from the original Spanish to English and, not for the first time, it drones on for many pages rather than just summarising the game as a run-and-gun sideways-scrolling platform game with cut-scenes. In fact, the concept is so simple it really doesn't need a manual, period.

If that diatribe doesn't put you off though (And bear in mind that, according to the Internet, I'm the only person who doesn't like this game!), you can download it from Relevo Videogames' web site. The physical versions are however somewhat hidden away on www.sellmyretro.com but can be brought up by doing a search on "invasion".