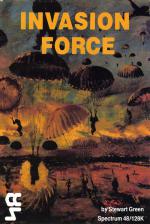 CCS has simulated billions of battles in its time, so it would be hardly surprising if it ran out of the blighters. In fact, come to think of it, Invasion Force doesn't actually simulate any particular historical battle at all.

Rather than having to 'recreate' some military clash that happened ages ago, knowing perfectly well who won and everything, you're now given a chance to make up a few scenarios of your own. The only criteria you're given are that they happened sometime in World War II, and that the objective is set by the computer. You can even make up the names of the ensuing conflicts if you want (if you think of particularly good one, write it on the back of a postcard and get rid of it as quickly as possible).

This flexibility even extends to the selection of units you're provided with - you can choose them yourself. The only snag is that you've only got a limited number of 'credits' to 'spend'. So if, for example, you decided to send in 30 squadrons of fully-laden bombers to give the enemy a good pounding you'd probably find yourself left with only enough credits for a couple of pretty knackered foot-soldiers to mop up on the ground. Careful planning is called for, and this extends to selecting the right sort of men and equipment for the task you've been set. So a fleet of heavily-armed gunboats will be no use whatsoever if the objective is halfway up a mountain several miles inland.

Once you've sorted all this out the game gets into full swing, with all the usual deploy, movbe and fire stages to struggle through. Inbetween, the enemy has a go. If you've picked a two player game the enemy will be, yup, player two, otherwise it'll be, right again, the computer. Each unit of your forces has the usual strength, movement points and so on.

Strategy-wise, things are pretty well up to you. It's all in where you bung your forces to start with if you ask me. As well as throwing soldiers, guns and stuff all over the place you may want to arrange some form of transport for them. Ships, trucks, motorised infantry and planes are the obvious, and indeed only, transportation devices, and cunning use of them will enable your forces to whizz all over the map with maximum efficiency.

The grafs are the usual wargame fare - little flashing squares and things. Character-by-character scrolling is of course present, as are weedy little sound effects and all the other features that make wargames so unappealing to the majority of people. The purists will be delighted though.

And the fun-factor? if you ask me, Invasion Force doesn't quite have the 'oomph' of certain other wargames I've tackled in the past. Even when the meagre graphics are excused, and the scruffy presentation is generously overlooked, it just doesn't quite manage to stimulate the imagination and get the adrenalin flowing as much as the best wargames around. This discrepancy could probably be put down to personal taste, so don't let it instantly put you off what is otherwise a very well-thought-out game.

The only other problem with Invasion Force is that it's only going to appeal to people who've played this sort of thing before and are looking for something a little different, in which case it comes highly recommended. If, however, you're new to wargames you'd probably be better off starting with a more traditional and faster-paced one (maybe Theatre Europe, just out on budget).

Not the most polished of wargames, but certainly flexible. Loads of scenarios give it a long life expectancy, and there are one or two innovative features too.

Not the most polished of wargames, but certainly flexible. Loads of scenarios give it a long life expectancy, and there are one or two innovative features too.