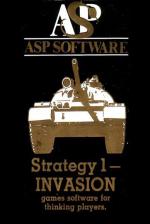 Another one from Argus. This one raised my hackles before it even started - You are the commander of the Western Alliance' it says, the Reds are attacking'. Then it says Reds are stupid' - I think this kind of thing is insulting the intelligence of the audience, like those badges which say Nuke ‘em till they glow’ — it’s not really funny, Just childish.

Anyway, the game is played on the same sort of grid as Bismark, and the evil Reds come creeping down towards you. Each turn you are given so many resource points, depending on how many cities you control, which you then use to buy units and attack points. The Reds are given overwhelming force by the program, which tends to make the game more an exercise In headbanging than a game of strategy and skill. Argus run away with this month’s mouldy cheeseburger; and I run like hell in the opposite direction.

This game is more an exercise In headbanging than a game of strategy and skill. Run like hell in the opposite direction.