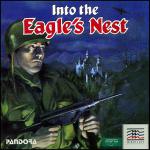 A first release from a new label is always interesting. Will it be able to break into the highly competitive games market? Pandora's first offering looks pretty good, so it looks like it's in with a chance.

Into The Eagle's Nest is another Gauntlet clone, but it is the first one to get away from the thud and blunder fantasy setting. Set in the Second World War, the plot is not a million miles away from Alistair Maclean's Where Eagles Dare.

There has been a suspicious build up of enemy troops in what was always thought to be a strategically unimportant area. This leads to rumours of a major counter attack. The enemy's forces are centred in a mountain fortress impervious to normal forms of attack. Already three of your agents, who have tried to penetrate the schloss, have been captured, although one of them did manage to wire the place up with explosives.

There are four missions for you to undertake. The first three involve rescuing your colleagues, the last the detonation of the explosives which will destroy the castle. The castle's commander is an avid collector of fine art treasures which you get to keep if you defeat him. A nice secondary objective here.

This is a very attractive game although a bit slow in places. My major grumble is that everyone use pop guns as weapons! Also, it takes *two* bullets to kill a soldier. You can take up to fifty hits before you die, but there are medical supplies dotted around.

Other features include ammunition boxes, to replenish your supplies, explosives that, not surprisingly, explode if you shoot them and lifts, which can only be used if you have a lift pass.

Overall, Eagle's Nest is a thoroughly enjoyable game. Perhaps not quite top notch but Pandora shows definite signs of promise.

A thoroughly enjoyable game. Perhaps not quite top notch but Pandora shows definite signs of promise.