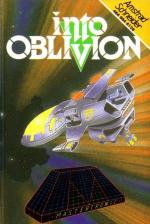 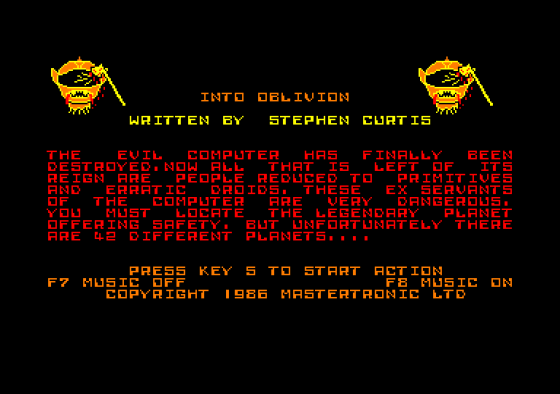 Remember the names Human Harvest and Graceful Degradation? They were both provisional titles for this, the latest blockbuster from Stephen Curtis. It picks up where his last game left off but in a totally different type of game made up of a massive number of screens.

The all powerful computer from the first two games in the series (Nosterraqueous and Soul Of A Robot) has been destroyed, leaving a galaxy of 42 planets that is infested with killer droids intent on destroying all intruders. The 42 planets combine to make a total of about 2,500 screens of action, which should be enough to be going along with. The aim is to find the one safe planet away from the rest of the dangers and this is no easy task.

You control a little chap in a Mk II Seeker that can fly and blast away aliens with a laser. When he's on the ground he trundles around on a little wheel but flaps a couple of wings when he's up in the air. On every screen you encounter there are the alien droids that appear in groups of three. They follow different movement patterns around the screen, sometimes exploding when they hit the edge of the screen. They can be shot or avoided but will keep coming back as soon as all three are destroyed.

At first it may seem that the aliens pose little threat and are easy to avoid but with such a large task ahead of you the gradual attrition caused by collisions with them becomes a major factor. Periods of immunity to them can be gained by picking up the right object, which changes the border colour of the screen.

On many screens there are flying saucers which you can activate so that they rise up the screen and takes you to another planet. Sometimes there will be two saucers or one that cannot be used until a barrier above it is released. To remove these barriers another object has to be found and picked up.

The Seeker can also move off the sides of screens along a planet surface but the way will often be blocked by no-entry signs or by a "corrosive atmosphere" that costs you a life. Another mode of transport is the system of transporter screens, but again you have to find out how to operate them.

While searching for the safe planet you need to collect over 90 units of psyche which appear and can be picked up in the same way as other objects. Some screens have direction arrows at the top and these can give an "as the crow flies" indicator of where the safe planet is. Also in this top section of the screen are the detailed planet backgrounds that change as you hop from place to place.

The most impressive thing about the game is its size and the need to explore. This will keep you going for a long while, trying to find the safe planet and overcoming all the obstacles. It's also a game that will require mapping in order to get through it. The one drawback is that while all this exploring and mapping is going on there isn't much to get you really excited - it's certainly challenging but probably won't take you to any great heights of addiction.

There really are an awful lot of screens, but there really isn't anything to do on any of them. The obstacles are boring, the nasties are lifeless and the controls are pretty dull too. If you want something big and difficult to map, it's certainly good value. If you want gameplay, on the other hand, it just hasn't got any.

N. Not much variance in the screens.
N. Not enough fast action to get you really hooked.
N. Graphics aren't as attractive or stylish as in the two previous titles.

Doesn't lose too much on the graphics side, but then it didn't have very much to start with.

If you want something big and difficult to map, it's certainly good value. If you want gameplay, on the other hand, it just hasn't got any. 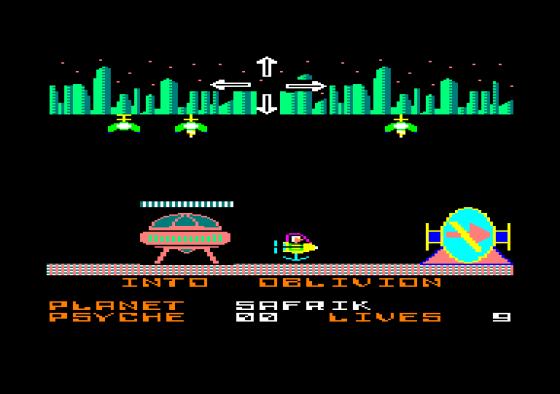