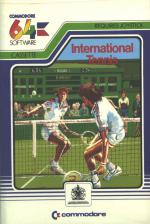 This is the latest in Commodore's International Sports series and although it lacks the range of options available on Activision's version, its simplicity makes it suitable for the less ambitious gamester.

This is a two player game and the opening screens give the usual Commodore option to select the colour of each player's outfit, level of play (one to four) and one or two player game. When satisfied, the court is revealed giving a viewpoint from the side in three dimensions.

A joystick is essential to play this game and nine possible strokes are available. Play commences by pressing the fire button to serve the ball. To hit the serve the fire button must be pressed again and the success of the service depends on the position of the joystick and the height at which the ball is struck. Foot faults are possible, as are net calls and faults.

When the serve is returned you must dash over to intercept it, select a joystick position for the stroke you wish to play and press the fire button to make the swing.

Scoring follows the usual tennis conventions and the match is the best of three sets. If a player reaches seven sets without gaining two sets advantage over the opponent, then a tiebreak takes place until the match is decided.

The sound effect for the shout of the crowd is awful. Even worse is the constant repetition of this din when a match is over and the credits roll as the victor acknowledges his success.

A joystick is essential to play this game... Nine possible strokes are available.