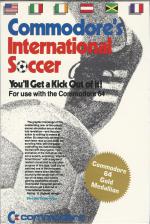 H.R.H. makes her debut in computer games when she presents the winning captain with the trophy in Commodore's latest International Soccer cartridge.

The football game is by far the best sports simulation even produced for any microcomputer and is the standard by which all future sports games will be judged.

Several gameplay options enable you to choose the colour strip of your team so that you can choose your favourite team's colours, you can also choose the length of each game and whether to play against a friend or take on team Commodore.

It's the graphics that make the game - the running movement of the players is about as authentic as computer graphics will allow.

When the ball goes out of play the computer acts as referee and knows whose throw it is - the nearest appropriate player trots over to the ball, lifts it above his head, and throws it in. The ref also awards corner kicks and goal kicks and is very fair and sporting generally which deserves praise as in the one player game the computer is both referee and opponent.

The goalkeeper is capable of athletic dives and leaps that would make even Pat Jennings sit up and take notice.

There are so many nice 'extras' in this cartridge like the cheering crowd who sway to and fro when a goal is scored, and the advertising slogans around the perimeter of the pitch but perhaps the best is at the end of the game when the winning team line up in front of the stand and are presented with the cup by the Queen. The winning captain then raises the trophy above his shoulders to take the adulation of the fans.

The game plays well as having outstanding graphics - passing and shooting require considerable skill and it is possible to construct some quite complex moves.

The best game yet for the Commodore 64 and at only £9.99 an absolute must.

The best game yet for the Commodore 64 and an absolute must.