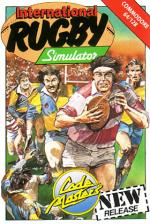 Ayyyy - Up and under! Lovely try! Oooh, 'e's off for an early bath. Hahaha! - and other rugby commentator type phrases. If you're the kind of person who's familiar with these but doesn't relish the thought of getting beaten half senseless and being freezing cold on a rugby pitch, then Code Masters' latest simulation is aimed at you.

Play a one off game (for either one or two players) or in a league: either way, the action begins with the kick off and a mad rush down the field by your team. The object is then very simple; run over the opposing team's goal line whilst holding the ball and then put it on the ground. Simple, eh? Well, not when the other team try and stop you from doing this.

Many features of the game of rugby are included, such as line outs, scrums and conversion kicks. You can tailor the style of play by changing the team 'policies' which govern the type of defence tactics to be used.

I can't really profess to being a great rugby fan in the first place, and Code Masters' latest 'simulator' isn't the kind of game to make me think otherwise.

The graphics and sound are rather poor to say the least, and unfortunately the gameplay matches this quality.

It's all very well haring after the player with the ball when you can't tackle him when you get there. Despite their (successful) attempts to create a higher profile, I sometimes think that Code Masters compromise quality for price.

Don't buy it because it's cheap - save up for something a bit more expensive and a lot better.

I'm always wary of dodgy slogans on game packaging and putting 'definitely the best rugby game' when it's the only rugby game I can remember is highly dodgy. What's worse is that David Darling is the only person quoted as raving about it!

Well, to be honest, I can't see many others being enthusiastic, as it's a pretty useless program. It's all very well including leagues and other tactics when there's no tackle move. I've player it enough to have to write about it, but I can't see myself playing it again.

Presentation 72%
Lots of options but a naff control system.

Sound 50%
The opening tune isn't too bad, but the other tunes and sound effects are crummy.

Lastability 31%
Soon enough everyone will get bored of it, rugby fans or not.

Overall 39%
The worst rugby game out and one of the weakest sport sims in general.

The worst rugby game out, and one of the weakest sport sims in general.