Published in Your Sinclair #2 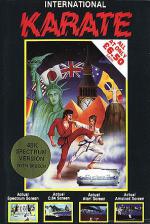 With so many games based on the thrills and spills of the old Kung Fu movies, International Karate is definitely a worthy attempt at being the best.

Animation's fine, but the backdrops of the various countries you fight in get pretty boring after a while. But then graphics isn't what the games all about. Clobbering your opponent hard and fast's the aim of the game... International Karate has its Bruce Lees positively leaping all over the shop!

The fighters can choose from sixteen different movements but, as you can imagine, the logistics of carrying out these sophisticated moves - especially in a two-player bout! - is more than a set of weary fingers - or even a jaded joystick - can contemplate.

The judge of the fight announces - yes, the program speaks... and it's almost understandable too! - the scores, and puts the players back to the starting grid if the fighting gets too silly.

It's an enjoyable game - but getting the maximum out of your fighting figure is a little difficult. All the same, it's fairly addictive and, if you just restrict yourself to a well- chosen routine of kicks and punches, you can generally get good enough to fight your way through the levels.

It's fairly addictive and, if you just restrict yourself to a well-chosen routine of kicks and punches, you can generally get good enough to fight your way through the levels.