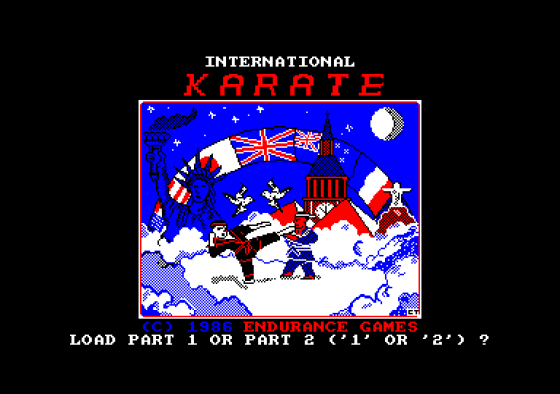 The software house is aptly named in this case. Not only have we had to endure months of wait for the game but now we have to endure two men beating the tar out of each other on screen again. To say that the combat-game motif had been overdone a little would be an understatement, and I for one am fed up to the back teeth with them particularly when, like this one, they have nothing new to offer.

Like most previous combat games it's a two-dimensional encounter, the two fighters having one of six famous landmarks as the backdrop to their bone-crunching activities. There are sixteen possible moves. Eight with the fire button pressed and 8 without, but you probably won't end up using all of them. One or two players can play, the winner of a two-player game going on to face a computer opponent.

The six computer opponents appear against different backgrounds and to get through to the next one you have to defeat a fighter twice in three bouts. Each bout is 60 seconds long, in which time you have to gain two points (yin and yang symbols) by felling your opponent. The judge will award half or full points and the corresponding score. At the end of each bout the time remaining is added to the victor's score. 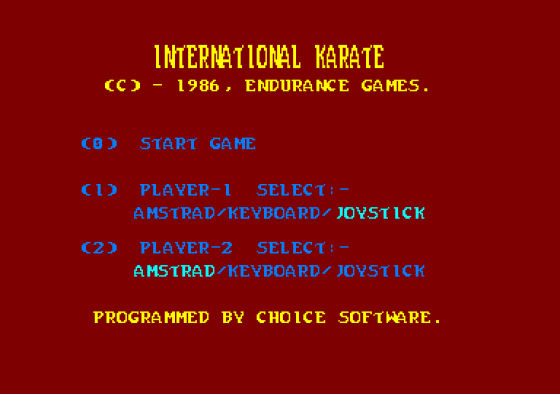 If no one gets two points then the fighter with the most points wins; a tie on points results in a rematch. If you can win two bouts then you progress to the next fighter, who is of course tougher than the previous one and equally intent on pulping your head. In between fighters is a bonus stage where you smash tiles but this just involves hitting a key at the right time to smash as many as possible for a bonus score - not much skill in that.

Get past all six and you become the international karate champion. But it's more likely that you'll end up with your face in the dirt and multiple fractures all over your body.

The computer fighters are fast. If they decide to perform a killer of a move there's not a lot you car. do about it. They're impossible to anticipate and you'll need superhuman reflexes to respond to their attacks. That means the only way to beat one is to devise your own game plan and stick to it, hoping that you're quick enough and get in the right place to finish him off. The best way is to get familiar with a few moves that you can use automatically for defence and attack and stick to those -trying to use all 16 is bound to end in disaster. 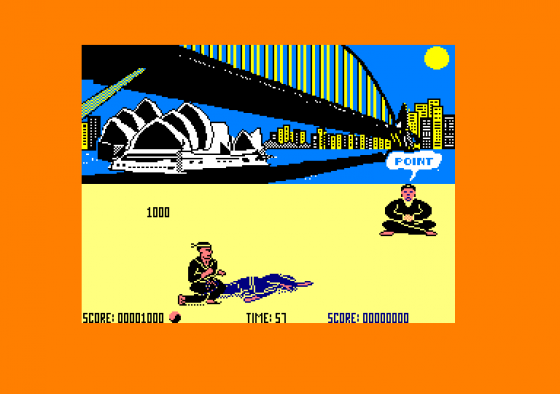 The animation is good, although everything happens so fast that you won't have time to see much. The landmarks are drawn all right but have nothing to do with the game. The gameplay itself is just like Fist or Sai Combat, only quite a bit faster. The computer opponents are beatable but it's incredibly frustrating to have them nip in an attack that you hardly have time to sec, never mind do anything about.

There's nothing new here so it's only really of interest to the newcomer to combat games (but they'll find this one tough) or the combat addict looking for a very tough game.

Finally something new in the world of combat games: pretty bits of scenery in the background! What d'you mean, it's boring? Okay, so the gameplay is like every other combat game you've ever seen only not quite so good.

Fair enough, the graphics of the fighters are small and overlap confusingly - but at least they beat each other senseless in front of some great backdrops, and that's what counts.

Can get a bit confusing trying to work out which one your fighter is, but this only adds interest to the gameplay.

N. How unoriginal can you get?
N. Computer opponents are just too fast and deadly at times.
N. You'll probably end up smashing the desk in two in frustration.

The graphics of the fighters are small and overlap confusingly - but at least they beat each other senseless in front of some great backdrops. 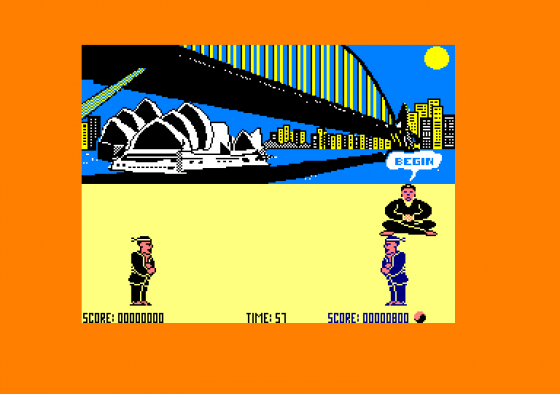