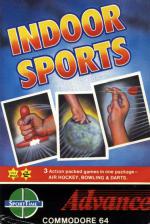 Game, set and match to Advance - Gordon Hamlett takes an approving look at their latest offering.

At long last an indoor equivalent of the famous World/Summer/Winter Games. Although going under the unoriginal title of Indoor Sports, Advance Software's latest includes four events any one of which could stand up in its own right. The four sports are: ten-pin bowling; darts; air hockey and table tennis.

Hot on the heels of US Gold's 10th Frame, the ten-pin bowling makes for an interesting comparison. To start with, Advance's graphics are a lot bigger and brighter. The game is presented side-on as the bowler delivers his ball, the action then switches to head-on as you see your ball hurling down the lane and, in my case, usually straight into the side gutter. On the debit side, controlling your ball is a lot harder than in 10th Frame.

You start by positioning your man in the lane and then choosing the spot you are going to aim for. Timing the release of the ball is crucial. Get it wrong and you either trip over your own toes or get dragged down the lane after your ball. Either of these occurences tends to severely hamper the accuracy of your shot! The bowling action is excellent in sideways perspective but determining your aim and the degree of hook is very difficult. As the action switches to the skittles, you also get a picture of your man's head pulling a variety of faces depending on the success or otherwise of your ball.

Darts has never been particularly well done on computer. Advance's darts is the best I have seen so far but still lacking something. You start by moving your hand across the bottom of the board until it lies under the spot you want to try and hit. Throwing the dart involves selecting the arc of you throw and the power. The scene then switches to a graphic of your man throwing the dart.

This method of throwing works a lot better than the usual wobbly hand and is also a lot harder to judge accurately. This is because there is no one set combination of angle and power that works for a particular shot. You can throw hard and flat or slow your shot down and go for more elevation. There are all the usual options to choose from - 301, 501 or 701, starting or finishing on a double, and the accuracy of your opponent.

On to air hockey, a game I have not come across before on the computer, but one in which I have smashed many a knuckle playing in amusement arcades. The basic idea is to slam a plastic puck across a table into your opponent's goal before he does likewise to you. The puck is supported on a cushion of air, hence the name and, while brute force is particularly satisfying, you need to have more success when the puck is bounced sneakily off the side walls.

Again, the simulation is excellent with the speeds and angles of bounce feeling just right. The game is played to a time limit but finishes earlier if one side scores twelve goals.

The final game is table tennis. Advance's version has also been released on its own under the name Superstar Ping-Pong. It was reviewed some months ago in Gamer and is by far the best of the various table tennis games available. One useful tip with this one is to let the bat move itself while you are getting used to the game. This stops you losing heavily.

All four game events are characterised by an impressive menu-driven option chart which allows you to select different speeds, game variations and difficulty levels. All the games, apart from air hockey, can be played solo and there are options to play against either the computer or a human opponent. All in all, Indoor Sports is an excellent package, well presented and superb value for money.

An excellent package, well presented and superb value for money.