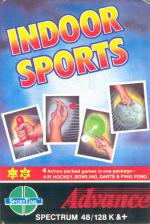 This sports simulation licensed from the American Design Star Inc allows up to four people to participate in a series of four indoor games. The evens are two player only, with asecond round being played if three or more competitors take part. If an odd amount of players are competing, the computer takes the place of the missing opponent.

Air Hockey is played on a table with walled edges and a goal at either end. Both players are equipped with a 'hitter', which moves within the confines of its own half, to bounce the puck into the opposite goal or to defend their own. Three playing speeds are available, with a score and time countdown given. Winner is the first player to score 12 goals within the specified time limit.

The next event is Darts. An arrow is aimed by sliding it along the bottom of the screen, the arc of the throw set by use of an angle meter and strength regulated on the power meter. A thrown dart's position is shown on the board with a message section above it indicating trebles, doubles and misses. Scores are 'chalked' on either side of the board, with a running total given after every three darts. The game is lost if available time (shown by a countdown) falls to zero.

In Superstar Ping Pong the bat is moved either manually or by the computer. If the auto-move option is chosen, the fire button is used to serve and the joystick, or appropriate keys, to determine the choice of return - this can be using back-spin, an attacking smash or at varying angles. When manually operated the bat can also be moved left and right along the table end. If the ball is not returned onto the table, or hits the net, a point is lost. The game is won by the first player to reach 21 by two clear points.

Now on to bigger balls, this time at the Ten-Pin Bowling alley. Having positioned the bowler, an arrow is moved to determine the ball's direction and, using the joystick, its curve chosen. The ball is released by pressing fire at the correct moment during the bowler's swing. A point is awarded for each fallen pin, with those pins still standing shown at the top of the screen. Should the bowler ever cross the line on the alley, a fault is incurred and no points are scored.

'None of Indoor Sport's four sub-games holds any lasting appeal, and all of them are very easy to master. The perspective of the air hockey is superb, and the action is smooth and lightning fast. The darts is the easiest game to suss- maximums being no trouble to get. Superstar ping pong is again very easy to master, mainly due to the dense opponent. Ten-pin bowling, being the best of a bad bunch, takes quite a time to get into - but again good scores are easily repeated. You may find one or two games that you like, but it's asking a bit much at £7.95.'

'I think Advance have scraped the barrel a little here. The events (most of them not too interesting to begin with) are badly implemented and none of the actual 'feel' of the originals is conveyed. The badly defined graphics are marred further by the garish use of colour. The sound is awful, there are no tunes and effects during the game are thin on the ground. I wouldn't recommend this, it simply isn't worth the asking price.'

I wouldn't recommend this. The badly defined graphics are marred further by the garish use of colour.