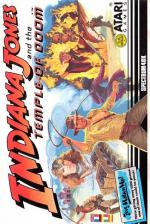 It's true Indy looks like Desperate Dan. It's true everybody including Indy adopts the same dazed crumpled expression. And it's true some of the time you die for completely unfair reasons.

But it doesn't matter. Indiana Jones and the Temple of Doom is an excellent conversion - just about as good as is possible, I reckon.

The coin-op has been out a while now and there are plenty of people out there well experienced in whipping the odd Thuggee and ascending the odd rock face. Those people won't be disappointed. This is at least as exciting as the original.

There are three sections to the game roughly related to sections in the film. Though it's fiendishly difficult to get through each section it is possible to move between them without actually completing each one. For example, in Part 1 you have to release nine urchins from cruel tiny cages for maximum points. It's actually quite possible to move on to the trolley ride in Part 2 whilst leaving the urchins to suffer. A shame but life is hard.

Part 1 sets the pace for the rest of the game. Indiana releases (or not) the children from their cages. He also whips the Thugee guards who fall to the ground in a dazed state. By whipping them a bit more, he can send them hurtling over the side of a convenient rock face.

In Part 2 Indiana leaps in to a mine quarry-truck and has to steer it over a rail system even more unreliable than the Fenchurch Street line by leaning in the right direction at the right moments. At the same time he has to use his whip to smash passing rocks and bats.

Then, in Part 3, Indy has to grab the Sankara Stone by battling his way over a molten pit. Lots of dodging and careful timing required here. Once grabbed the stone has to be deposited at the feet of Kali, a well known Goddess of death. To actually complete the entire thing Indy has to deliver three such stones, whereupon he escapes over a rope bridge which, of course, can only be described as ropey.

The game is - it must be said - fiendishly difficult and stage one is not necessarily the easiest level.

You need to react incredibly quickly to whip the Thugee and, conversely, if you try to do anything other than whip them you will fail - they appear to run faster than you.

There's also this bearded firebomber, who's another major problem. If you don't get yourself in the right whipping position at once it's no more sequels for you. Again, you can't run away-the bomb comes after you.

There is, however, a problem with at least one aspect of the gameplay on this Spectrum version. Inevitably the programmers have opted for a two-colour display, rather than have Indy changing colour to match the background all over the place. They opted for black and white. It looks pretty good, very good even. The trouble is some of the time you just can't see what's happening as white sprites mingle into white backgrounds - it's not nearly as bad as, say, Slap Fight but I'd say at least one life lost in every five wasn't my crummy playing technique.

Despite the odd gameplay quibble, Indiana looks excellent. It's possible to mock the sprites for being a bit samey and not looking like the real thing but they are still quite a programming achievement. The backgrounds are excellent particularly in the opening section.

If you've been playing the arcade game and waiting the conversion, fear not, they've done you proud.

Excellent conversion. Some quibbles because of colour problems but basically highly recommended.

Excellent conversion. Some quibbles because of colour problems but basically highly recommended.