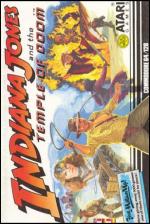 The player is given control of the legendary adventurer as he travels to India in pursuit of the Sankara stone, stolen from the remote village of Mayapore by the Maharaja. Once protected by this artifact, the town now lies devastated. The thoroughly nasty Maharajah has made his palace into a worshipping ground for the Thuggee death cult, and has the village children working down his gem mines.

In the first of three screens, Indy travels through the platform-like mine caverns, climbing ladders and crossing narrow passages in search of caged children. Pressing fire makes his whip lash out, which kills snakes and forces pursuing Thuggee guards off the platforms. Constant lashing is vital to Indy's survival, as contact with a guard or snake results in a loss of one of his five lives. If a cage is found, a crack of the whip breaks the lock and frees the imprisoned child.

Having released all seven children, Jones escapes down the mineshaft to level two. Here, he hurtles down the diagonally scrolling train track in a mine car, which is tilted left and right to avoid broken rails or change lanes to avoid dead-ends.

Having survived the course, Indy enters the final level - the Temple of Doom. To finish the screen he retrieves the Sankara stone from a statue of Kali, the goddess of death. The stone lies in the middle of a lava pit and is reached by negotiating a moving bridge.

Should the stone be recovered, Jones re-enters the first level (albeit with different layout) to begin a second adventure. Once three stones have been collected, a rope bridge is reached, and Indy escapes to safety.

What's happened to my favourite hero? The less-than-brilliant coin-op has been converted in all its supposed glory to create an even less brilliant C64 game. Graphically, the second stage is the worst, with badly drawn and variably-sized rail cars whizzing along tracks of dubious perspective.

Indiana makes like 'Automan', achieving sharp-angled turns with unbelievable efficiency. There are so many niggling points: the unintelligent collision detection, poor animation, the dire soundtrack and, possibly the worst, a multiload system that loads in level one even when you've just died on it.

It's all there in memory, but just to make sure, the program loads it all in again.

The stunning loading picture of Indy gives rise to high expectations. However, hopes are soon dashed when you start playing. The action is unbelievably frustrating, and the effectiveness of the whip seems to vary from second to second.

The 'depth' of platforms doesn't register and you hit objects four feet away simply because you pass behind them - the collision detection between sprites is equally dodgy. The tune rapidly irritates, and the gameplay becomes very repetitive once the correct routes are known.

To cap it all, there's a really pathetic multiload system to break up the action. Save your money for something more interesting.

I never liked the original arcade game that much - the gameplay is very weak, and once you've seen the brilliant graphics and heard the amazing sampled speech, there's little incentive to put any more money in the machine.

On the C64, you haven't got the speech and graphics capabilities, so you're left with a very simple three-level game. None of the screens are challenging, and it only takes a few goes to master them. The worst thing of all is that more time is spent battling the unwieldy loading system than playing the actual game - which is very frustrating indeed.

When you look at some of the original games around this month, like SEUCK, Zig Zag and Nebulus, it makes you wonder whether there's any point in pouring money into non-starter projects like these.

Presentation 38%
A very clumsy multi-load system, and no options.

Graphics 44%
The loading screen is the graphical highlight - the rest of the game is a jumble of poorly animated sprites and inept backdrops.

Sound 39%
An abysmal rendition of the soundtrack drones along, supplemented by weak effects.

Hookability 46%
Initially spoiled by niggling weak spots in the gameplay, and the intrusive multi-load only serves to further dampen the enthusiasm.

Lastability 35%
Learning all the routes shouldn't take too long, but even this may prove too frustrating for some.

More like Indiana Jones In The Program Of Doom. There are so many niggling points: the unintelligent collision detection, poor animation, the dire soundtrack and a multiload system that loads in level one even when you've just died on it.