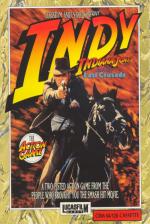 Did you know the word grail comes from the word 'gradual', meaning step by step? No? Well, neither does the Collins English dictionary which claims the word derives from the Old French word 'graal'! Oh well, you shouldn't believe everything you read in instruction leaflets.

The structures of the C64 games is much the same as the Amiga one, and starts with the youthful Indy (here represented by the designer stubble adult due to memory restrictions!) stumbling over the looting of a valuable archaelogical site. The crooks are after the fabulous Cross of Coronade, here hidden somewhere in some maze-like caverns. Indy must avoid falling stalactites, jump from rope to rope over deadly water and whip the baddies into shape. As it's dark underground Indy must use a torch to see by, but these but out quickly so new ones have to be collected regularly. Once the Cross has been grabbed, Indy has to escape from the caverns.

Succeed and the second half of level one is multi-loaded in. Indy's escape sees him running along the top of a speeding circus train, complete with rhinos and giraffes sticking their heads out of their carriages.

Level two is the Catacombs; this is where the adult Indy is looking for a shield under a Venetian museum. This is a fairly big maze where rats and flames prove the main hazard, along with occasional lashes of lightning! Find the shield and Indy must scale the walls of Castle Brunwald, where Nazis are holding his father hostage. To get to the top he must wrap the whip around posts, automatically swinging him between the shuttered windows.

The next load transports Indy into the bowels of a huge Zeppelin airship which he'd hoped would take him out of Germany. Now it's turning back to Berlin, so Indy must get to the small planes suspended under the massive aircraft. Of course there are plenty of Nazi stormtroopers searching for him, so it's a good idea to find Nazi passports to sto the alarms going off. Before escaping, Indy must find the Grail Diary which his father has lost.

The last level takes place in the temple of the Grail. Dr. Jones Snr has been shot, and if Indy doesn't get the Grail to him, he'll die. Of course, the Grail is well protected, with razor-sharp blades to jump over, bottomless pits and tiles that crumble beneath the feet. This is a relatively short Metrocross-style level, but the time limit is harsh. On all the other levels, if you lose all your lives you can continue play on that level. But die on the final level and you go back to the Zeppelin level.

On the C64 at least, Indy gets a really quite good game. The main sprite is well drawn and animated, complete with stubble on his chin.

Background graphics are generally good, with the Zeppelin stage nicely replicating the air sickness-inducing swaying of the Amiga version. Sound is a disappointment - spot FX only - but there's a good title tune.

Actual playability is improved by being that vital bit faster, and with five loads this is a good value-for-money package.

The similarity between the first four levels remains strong, but with a touch of extra speed playability is improved. And for only £10, the lack of variety isn't so much of a problem.

Morever, on the C64 you don't expect the character to be 'blitted' about at great speed, and so the whole pace of the game is much more acceptable.

Essentially an 8-bit game design, Indy seems at home on the C64 with attractive, weather-beaten sprites and backgrounds creating a good atmosphere. It's a pity then, then on levels like the Zeppelin there aren't more baddies to fight, but overall this is a professionally produced game which fans should enjoy.

Sound 48%
Respectable title tune, but in-game spot FX are a dull accompaniment to the action.

Hookability 72%
Good, varied opening level makes the game easy to get into.

Lastability 73%
The levels aren't that different, but good playability keeps you coming back.

Overall 72%
An attractive and playable game.

An attractive and playable game. Pity about the Spectrum status panel.