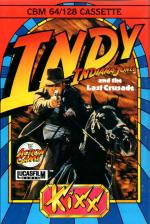 The game that spawned a thousand variations on the 'The man with the hat is back' puts in a budget appearance to follow up the fairly dire Temple Of Doom. Whereas 16-bitters got the choice of Lucasfilm's marvellous graphic adventure of the Tiertex coded action game, C64 owners were lumbered with a rather tired version of the latter lacking the pace, looks or challenge to do the film justice.

The four levels take Indy froom a small adolescent quest to find the Cross of Coronado to the quest for the Holy Grail itself, inside rat-infested catacombs (Level 2) leading to Castle Brunwald and a Zeppelin (Level 3). A quick flight takes Indy to the Grail Temple (Level 4) and a change of game style as Indy runs down the Temple corridor dodging sawblades, jumping chasms and learns to spell God in Jewish to reach the Holy Teacup.

Looking back to the original review in Issue 55 it's mystifying to work out where it got the 72% Overall mark from. Level 1's caverns certainly look depressing locations with minimal background detail, colour and shading and it doesn't get any better. The Zeppelin level shows promise bobbing along convincingly but the totally unambitious gameplay continually repeats, challenge goes out of the window and boredom is rife.

The worst of a bad job just has to be the sprites: everything from the cavern dwellers to the German guards in the Zeppelin are ill-defined graphics shuffling along morosely (obviously aware of their surroundings) and emphasising the programmers' complete inability to recreate the excitement and fun that characterised the movie.

The programmers of this simply have a complete inability to recreate all of the excitement and fun that characterised the movie.