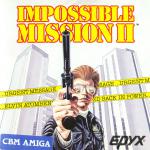 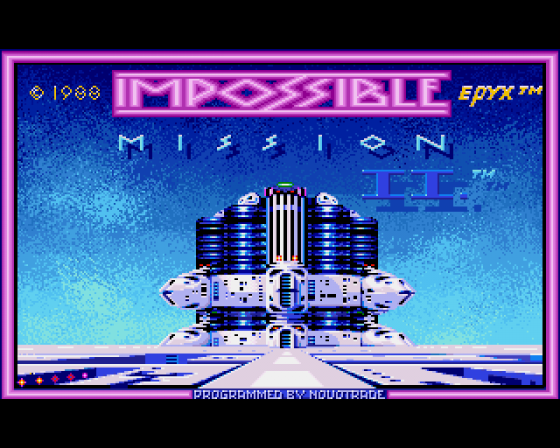 They all do it, don't they? These evil villains always seem to reappear after their original downfall to terrorise the whole of humanity - and who is the only person that can stop their evil ways for a second time? That's right! The person that stopped them in the first place!

Well, it's happened again! The evil professor Elvin Atombender has escaped from prison and managed to arm himself with a deadly missile with which he is threatening to destroy the World, if they don't succumb to his wishes. Wot a rotter, eh? But [Cue dramatic music!] Agent 4125 comes to the rescue...!

Agent 4125 prepares himself by donning his spy suit (white shirt, waistcoat and trousers) and zooming off to Elvin's base. The base itself consists of eight towers, each with their own pair of lift shafts which allow access to both sides of most of the rooms in the complex. 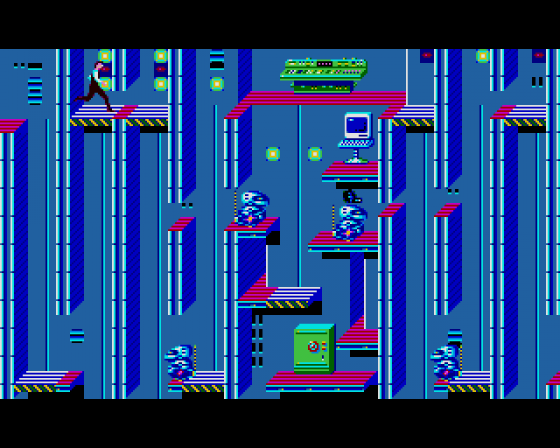 To complete the quest, you explore the eight towers, searching for access codes and music tapes which will allow you to enter the central tower, Elvin's hideyhole. To leave a tower and enter another, a three digit access code must be found. This is made up of numbers found by searching various objects and pieces of furniture, *but* not all the numbers are correct, so you must use your pocket computer to find the correct set of numbers. Woooh!

Each correct number is highlighted be the word 'correct' (obviously really) and the word 'completed' appears when the whole code is displayed. Access to the central tower is gained by blowing open the safes to find pieces of music tape. By recording and splicing together the relevant pieces of music, an entrance to the final tower is opened.

Also hidden in the rooms may be items which are of use to the intrepid adventurer such as lift resets; bombs, mines and robot freezes. On the other hand, there may be nothing there, so lok with care. 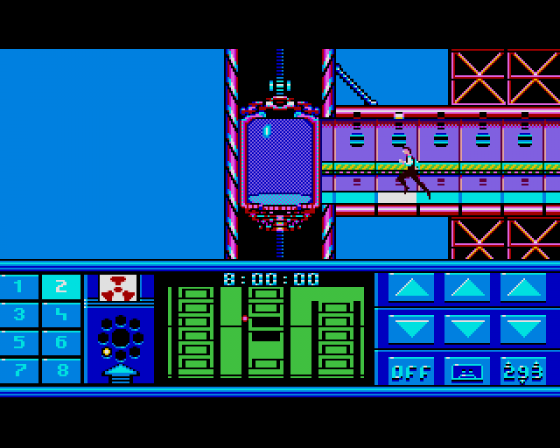 Maybe I'm a bit strange... oh, alright then I *am* a bit strange, but I always found Impossible Mission too difficult to be enjoyable, often being sent round the bend trying to sort the puzzles out.

Well, I'm glad to say that I found Impossible Mission II quite a bit easier than the original and therefore a more pleasant gaming experience.

Now Epyx have translated the game across to my favourite machine, I'm pleased as... as... as something that's quite pleased - although (here comes the bad bit) there could have been a little bit more done with the power of the machine. 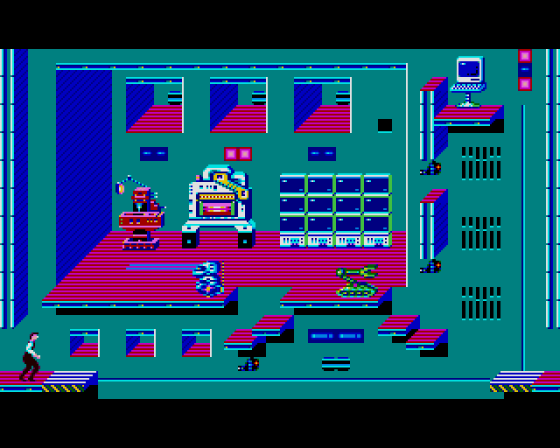 The graphics are very nice, but they're not brilliant; the sound effects are brilliant, but the tune isn't. Anyhow, despite the lack of a Gold Medal, Impossible Mission II is still an ace and really playable game.

It's the gameplay that makes this stand out from the crowd - and that's why it deserves a Sizzler. However, that's not to say that the rest of it isn't up to scratch - as Paul says, the speech is just about the best on the Amiga, and the graphics are well defined and the graphics are well defined and brilliant animated (shame about some of the colours though - I sometimes thought I was playing on the PC).

The reason I personally don't think it deserved the Gold Medal awarded to the C64 version is that it lacks any really "outstanding" qualities - the conversion is too literal.

But this is all griping about a game concept which remains, quite simply, brilliant. Buy it!

I remember writing in the C64 review of Impossible Mission II about the great improvements that had been made over the original, but nothing had been done with extra speech.

Now the game has been transported to the Amiga and the speech has been improved no end. In fact, I'd go as far as to say that it's the best speech I've heard on the Amiga.

The Elvin introduction and the scream as Agent 4125 falls down a hole are almost too good to be ture and the musical note on entering a room... well, it's just amazing! The graphics are really nice too, with well-defined backdrops and sprites. The designers could have chosen some neater colours, though.

Still, never mind about that, just play the game as soon as you can and you'll be convinced that Impossible Mission II is for you.

Graphics 84%
Very good definition and animation, but poor use of colour.

Lastability 95%
Plenty of scenery to search and the mission is tough enough to keep you occupied.

Overall 92%
Not as much of an improvement over the C64 classic as it could have been, but still a hell of a game.

Not as much of an improvement over the C64 classic as it could have been, but still a hell of a game. 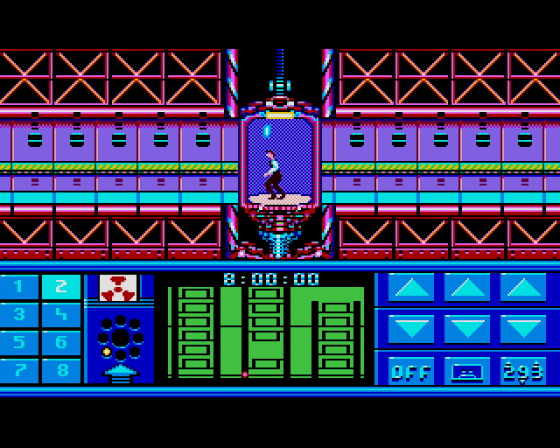