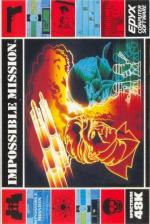 They said it couldn't be done - but US Gold have achieved the impossible and converted the Game of the Year onto the Spectrum. OK, so the amazing speech synthesis on the C64 version of Impossible Mission is missing - but everything else is there. Including the awesome addictiveness of the original.

In case you've been hiding under a stone for the last twelve months, we'll tell you just what you've got in store once you lay hands on a copy of this game.

The evil Elvin Atombender has been tampering with the world's computers and is threatening to launch a deadly nuke-missile shower that will destroy the Earth.

Your job is to penetrate Elvin's underground HQ, break his security code - and get into the control centre before he launches the missiles. You have just six hours to finish.

Being a mad prof type, Elvin has left bits of the control room password scattered about the 32 rooms of his stronghold - hidden in his furniture. You must search the rooms to find the bits and then use your pocket computer to piece them together in the correct order.

Sounds easy - but you'll have to deal with Elvin's unfriendly droids who inhabit each room. And find your way around the baffling maze of rooms and lifts.

The rooms are constructed to foil even the best secret agent - packed with catwalks and platforms connected by lifts. In each room there is a computer terminal which you can use to disable the robots or reset the lifts - but only if you have discovered the right passwords during you search for the key to Elvin's control room.

Elvin's robots behave in different fashions. Some are sluggish and don't seem too worried when you enter a room. But others will rush to zap you with a high voltage charge as soon as you set foot on their territory.

You have to deal with these using a snooze password which puts them temporarily to sleep. You can either pick up these passwords during a search of Elvin's furniture in the rooms or by playing a sort of "Name That Tune" game in the Code Rooms you will find during your exploration. By playing you can earn extra snooze and lift reset passwords.

The screen displays shows your agent in his current location and in the main window, with a plan view of the underground base - which unfolds as you explore - in the window below.

Impossible Mission is a game any self-respecting Spectrum owner should have in their collection. We defy you not to be hooked from the moment you load it. A mission not to be missed...