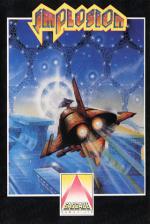 An artificial planet is on a direct course with Earth. At its heart is a white dwarf star, and the resultant collision with our planet would be catastrophic. Only one course of action remains - to send a fleet of three attack craft to penetrate its defences and initiate its implosion.

The planet is protected by a series of energy spheres connected together to form a grid. Seven of these pure energy structures need to be eliminated before the planet's vulnerable Trench system is breached.

To destroy each protective grid, all the linking energy spheres are eliminated by repeated blasting. When all the spheres are destroyed, the entire grid begins to collapse, and a Portal to the next level is located and entered within the ten seconds to complete the destruction sequence. If entry is successful, the next level is loaded from tape or disk.

Throughout the mission, alien defence ships attack, draining the spacecraft's energy. Contact with the grid or failing to secure a level within the time limit also causes a loss of energy.

Energy crystal stores are located around the grid and release four energy crystals when destroyed. These are collected to give extra lives, energy or points.

On the final level, giant power centres are destroyed to cause the final collapse of the impending threat - and Earth is saved!

The main problem I can see with Implosion is that the game structure tends toward the simplistic side. It appears that the technical aspects were tackled first, and then a game bolted on to the high speed scroller and clever grid system. One really annoying aspect is the incessant alien attack waves which constantly buzz around your ship like angry bees. These are difficult to shoot, since the ship is unwieldy and can't fire while attempting to turn.

Implosion is fast and plays quite well, but it boils down to being a very straightforward shoot-'em-up, which simply isn't enough to justly its price.

At first glance, Implosion looks good. The super-fast smooth scrolling graphics are very impressive, and there are some great tunes and sound effects. However, those favourable first impressions dwindle when you start playing. The gameplay is very simplistic and not at all challenging. There's little to do other than blast the links and avoid alien attacks.

Collecting the crystals would add a little variety to the action, but I found it far too risky a pursuit to be worthwhile. It took only one session to reach level six, and since there are only eight levels I very much doubt Implosion's lasting appeal, especially as the game ends when all the levels have been completed.

There just isn't enough depth to warrant the price tag.

Graphics 71%
Clear grid backdrops with fast and smooth scrolling. Nicely detailed main sprite, although the alien vessels are rather plain.

Hookability 60%
The immediate blasting should appeal to most games players.

Lastability 49%
The similarity of the levels and simplistic gameplay hardly make for an enduring pastime.

Overall 57%
A fast, graphically pleasing shoot-'em-up which provides only a moderate challenge.

A fast, graphically pleasing shoot-'em-up which provides only a moderate challenge.