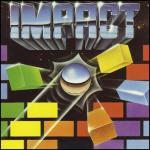 Well, I've been here before. About twelve times in the past few years in fact. It's Breakout all over again, or Arkanoid, or Krackout or Revenge of Doh if you can't remember that far back. You guide a little bat which moves smoothly along the bottom of the screen, bouncing a little white ball around the screen, demolishing coloured blocks and collecting falling wotsits which give you added powers. The selection business works in the same way as Slapfight. As you collect each wotsit, the next icon is illuminated down the right hand side, so it's a toss-up between whether you choose to enlarge your bat, light-up invisible blocks that break the balls into three etc. All the usual fare.

An interesting add-on is the fact that you can design your own layout of screens. There are eighty already in there, so you can play it for ages without getting bored. It's a shame that you'll have played all the other versions from other companies at other (cheaper) prices first though.