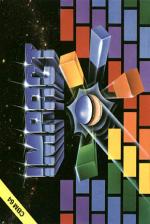 Audiogenic's Breakout variant features eighty levels of colourful destruction. The objective is simple: destroy all the bricks on-screen with a ball, deflected from a moveable bat at the foot of the playing area. Success is rewarded by entry to the next, more difficult, screen.

Some bricks release tokens which are collected to buy one of nine helpful items, including missiles, large bat and an unstoppable force-shielded ball. As equipment becomes available, the appropriate icon is lit and selected by pulling back on the joystick. Invisible bricks are also present, which are revealed by activating the 'torch' icon.

For every ten screens cleared an entry code is given which allows access to later levels in future games. Alternatively, the program incorporates a screen designer allowing the player's own pre-designed screens to be loaded, up to a maximum of 48.

The authors of Impact haven't burdened it with a pretentious scenario, but the game unfortunately reflects the plainness. It's reasonably presented, although it would have benefited from a two-player option, more polish and an easier-to-handle screen designer.

The jolly colours are offset by cheap-looking and simplistic high resolution graphics and somewhat basic screen layouts; the sprites are very ordinary, and lack colour and imagination.

The sound effects are alright - bouncy and quite tuneful - but there just isn't enough of them. The gameplay similarly disappoints: without any significant gloss on the action, it's revealed as just a simple and very limited clone.

The weaponry on offer is a major gripe: it can take ages to collect enough tokens for a missile launcher, only to discover you're given three unspectacular and slow-moving blobs. If you're looking for the definitive Breakout game, choose Revenge Of Doh; if you want a construction set as well, look no further than... Traz.

In the face of some stiff opposition comes Impact, a promising-sounding, but sadly flawed Breakout game. One of its main faults is the bat speed - it just doesn't go fast enough, which makes the gameplay infuriating. The graphics lack class, with some very flat-looking, gaudily-coloured sprites and bricks, and the sound effects are quite limited.

Having said that, Impact boasts some devious screens and novel extra weapons, and it does have a screen designer. However, when all's said and done, it just doesn't reach the high standards set by Revenge Of Doh and... Traz, and is consequently overpriced at £10.

I'm afraid that after playing Revenge Of Doh this month, my opinion of other more-straightforward Breakout variants is somewhat jaundiced. Impact falls into this category, since, with the exception of some fairly standard additional equipment, it's very much lacking in innovation.

As Breakout games go, it's a very polished, colourful and aurally pleasing one. However, it does suffer in the playability stakes due to the major fault of the bat speed: it's far too slow for the speed of the ball and the amount of baseline to be covered; the ability to react in time isn't enough to guarantee success.

This innocuous-sounding gripe is, unfortunately, such a detriment to the gameplay that it ruins what would otherwise be a pretty good game. If you're a Breakout fanatic, then Impact might make for an occasionally enjoyable game, but it's up against some stiff competition.

Presentation 67%
Inclusion of the construction set is the only compensation for average instructions and no two-player option.

Hookability 57%
Initial impressions are favourable because of the screens' relative simplicity.

Overall 40%
A below average Breakout variant only noteworthy for its construction set.

A below average Breakout variant only noteworthy for its construction set.