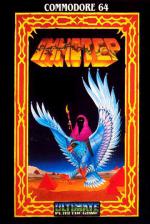 With three best selling arcade adventures under their belt, Ultimate have decided to turn their attention to pure, unadulterated arcade action in the form of Imhotep. The title comes from the name of a Egyptian statesman, architect and physician of the third dynasty (busy chap). The overall flavour of the game though, is distinctly non-Egyptian - Imhotep is in fact... a shoot-'em-up,/i>! (Well not quite, as there is a little bit of dodging and jumping involved).

Pharaoh Zoser has called upon Imhotep the Wise for advice on how to put a halt to the misery and famine that is spreading rapidly throughout the land and taking many lives in the process. Fortunately for the Pharaoh, Imhotep is as intelligent as his name suggests and comes up with a solution. Sort of.

There is a beautiful princess in possession of some sacred reading matter - books known as the Souls of Ra, which contain the secret of the Nile, 'whose life-giving waters will once again make the barren lands fertile...' to quote Imhotep. There is one small problem however - in order to get the books, Imhotep has first to consult Thoth, the god of wisdom, for the whereabouts of the princess. And this means passing through the distant, troubled lands of the rather unfriendly Jawi Nomads...

Imhotep begins his perilous journey mounted upon a bird of some description - unfortunately the Nomads are also in control of very similar transport. These birds have the most peculiar property of being able to shoot large, rather deadly white 'balls' in any direction. Well, at least the Nomad's birds can - Imhotep's 'steed' only fires left and right. The Nomads can either be shot or avoided, although there is the occasional attack from a virtually unavoidable 'homing bird' that can only be killed.

To make things worse, rocks and water droplets periodically rain from the sky, and to just make things really unpleasant, Imhotep has to progress on foot from level three, jumping gaps in the ground along the way.

I really can't believe that Ultimate release such unambitious drivel as this and expect to keep their reputation of being one of Britain's leading software development houses. Okay, so they have never really exploited the C64 as they did the Spectrum, but this is unbelievably disappointing considering some of the real gems they have released previously. The game is virtually unplayable -- in some situations, you're not even given a chance to react and thus defend yourself. The fact that the main character moves so very slowly doesn't help matters - the game is just too hard. When you're on the ground, it's almost impossible to avoid being hit by anything and jumping gaps is just a joke. This is an incredibly poor offering for any software house, let alone Ultimate. I hope their two new releases are a massive improvement - we've come to expect much better things.

Though not being that impressed with previous Ultimate releases for the Commodore, I must admit that they stand up pretty well when compared next to Imhotep. As with most Ultimate games, the graphics are very impressive - both the scrolling backgrounds and moving sprites are of a very high quality. The music isn't that bad but I'm afraid that although the game looks and sounds like a dream... it plays like a brick. The main skill involved seems to be fighting against the awkward control method and there is some appeal in being frustrated. But consistently dying, quickly, time after time, unavoidably, every game soon becomes very boring indeed. Why Ultimate releases games of this quality on the C64 is beyond me. They may still be almost unparalleled on the Spectrum software scene, but as far as their C64 releases go - the Ultimate label is not always a guarantee of a decent game.

I was quite surprised to see a shoot em up on loading the game, as I was expecting an arcade adventure. Considering the excellent quality of Ultimate's arcade games on the Spectrum, I expected to play something special. Unfortunately Imhotep most certainly isn't. While the graphics are good and the sound reasonable, the gameplay is not, being unexciting, totally frustrating and subsequently forgotten. It will be interesting to see if this poor quality continues, what with the fourth Sir Arthur Pendragon game, Dragon Skulle, and something called Outlaws about to make their appearance around now. Have Ultimate got anything up their proverbial sleeves other than proverbial arms?

Graphics 70%
Smooth, but slow, two-speed scrolling and some nice animation.

Value For Money 16%
Vastly overpriced and is put to shame by some of the poorer budget games.

Ultimate's worst yet. Vastly overpriced and put to shame by some of the poorer budget games. Far too monotonous, frustrating and hard.