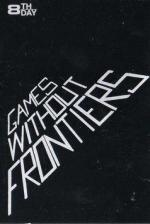 This is one of a batch of cheap label games from Eighth Day Software. They've been around for some time but have only just been converted for pilgrims paying homage to St. Arnold.

They're cheap, they're "Quilled", they don't have an enormous amount in them, but some of them are nevertheless extremely tricky Ice Station Zero, for example, puts you right up against it from the word go by whisking you across the frozen arctic wastes, hotly pursued by a pack of hungry wolves.

It's slightly typical of the Eighth Day Games that the only way you can escape from the wolves is by using an object that is extremely difficult to find. I think this isn't quite fair, since this secret weapon is concealed in another object which, if you "EXAMINE" it, is described as "Nothing Special"...! The answer is that you have to "SEARCH" it, but this is slightly misleading and not the sort of word-play that naturally springs to the fingers when pursued by wolves.

Once you've escaped the wolves, it's a rather traditional affair of stopping a mad scientist from blowing up the world. There are currently two other games in the series, one of which is slightly surreal in tone - Faerie - and the other - Quann Tulla - falling into the intergalactic conflict category.

One unusual touch is that each game has on one side of the tape, a tutorial for novice players as well as a short promotional blurb about the other games in the series.

This game is certainly cheap at £2.50, but they're pre-Illustrator efforts (i.e. there are no graphics) and I can't help feeling that I'd rather save my cash towards something more substantial. They used to cost only £1.99 when they first appeared on the Spectrum which was a bit more reasonable.

A text adventure where, once you've escaped the wolves, it's a rather traditional affair of stopping a mad scientist from blowing up the world.