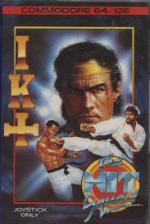 The major innovation in this follow-up to International Karate was the addition of a third opponent, controlled either by the computer or a second player.

Access to the various martial arts moves (including flying kick, head butt and a sensational split kick) is via the usual combination of direction with or without fire pressed. One or two points are scored for knocking down either of your opponents, depending on how good the move was.

The round ends when one fighter scores six points, or when the time runs out, in which case the fighter with the highest number of points wins the round. Whichever fighter has the lowest number of points is knocked out of the game, so even if you finish second, you're still in. However, if the two losing ighters have equal points, they both stay in.

After every two rounds, there's a bonus section where each fighter, in turn, uses a shield to deflect balls which bounce on from both sides of the screen. The round ends when he's hit or if he successfully manages to deflect all the balls - a very difficult task indeed.

IK+ must stand as the best beat-'em-up ever made. It's almost too good to be true with beautifully animated fighters, great oriental music and FX, and a superb two-player mode. The action is fast and furious with an extra dimension added by the third opponent. The computer fighters are fairly tough to beat and if it's too easy (or hard) you can alter the speed of play. Even the bonus round is immensely playable and over quick enough not to interrupt the great beat-'em-up action too much (unlike the painfully slow Spectrum version!)

The desire not just to get a high score, but to improve your karate belt colour will keep you playing this timeless classic for ages - it hasn't dated at all in the two-and-a-half years since its original release. If you overlooked it first time around, at a mere £2.99 you simply cannot afford to miss it now.

The best beat-'em-up ever made. It's almost too good to be true with beautifully animated fighters, great oriental music and FX, and a superb two-player mode.