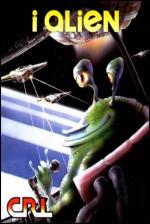 Following a nuclear war on Earth, the entire livestock population has become prematurely extinct. In order to feed the remaining people, mankind travels the Galaxy in search of new sources of protein.

A small alien creature has been captured by one such Terran ship but decies to flee in an attempt to reach an old escape pod deep within his home planet. Taking the role of the creature, the player battles his way through the starship, across the planet surface and finally into the sewer system, which leads him to the pod.

The alien begins his bid for freedom within the confines of the spaceship. The small animal negotiates the ship's complex series of corridors by moving from deck to deck using colour-coded teleports.

The ship is full of unfriendly beings, contact with whom reduces the alien's energy toward a fatal zero. Blasting the creatures results in different effects: some leave energy crystals behind which are collected to replenish lost energy, mutants drop acid flesh which is used for extra firepower and 'transmitters', which turn the alien green and reverse the controls.

Fellow prisoners are moved around the ship in 'trans-cells' - a harness which prevents escape. Contact with a trans-cell releases the prisoner, and if ten prisoners are freed, the alien is rewarded with an extra life. Care must be taken, however, since blasting the trans-cell also kills the captive.

A bomb has been planted in the ship to stop the alien's quest, which is reset before the countdown timer reaches zero. Once the reset panel is found, the alien is safe to seek out the exit to the next level.

Ever since the advent of V (or The Visitors, to give it its full title), it has been in vogue to place arcade adventures on spaceships, with lots of laser-blasting fun, death and mayhem. I, Alien is another in this line, and apart from some imaginative design and graphics it never reaches any heights of distinction.

The sound is pretty average, and overall the gameplay is nothing special. If you want to feel exactly the same before and after playing a game, buy this!

I was moderately entertained by I, Alien, although it can hardly be considered to represent any great advance in computer gaming. As arcade adventures go, it's fairly unusual and reasonably well produced.

The backdrops are colourful without being too gaudy, while the sprites are neither obtrusive nor impressive. Progress is very much dependent on mapping, and not a small amount of dextrous play, since avoiding the hazards and creatures is pretty difficult (due in no small part to the finnicky collision detection).

The instructions fail to fully explain the teleports, which actually allow access to more than one deck, and the exact manner of entering the next level remains a mystery, so if you do purchase - beware!

Presentation 57%
The instructions are lacking and apart from a restart there are no other options.

Graphics 58%
Colourful backdrops with an array of fairly unimpressive sprites.

Hookability 55%
Mapping is essential from the outset - a factor which might well put players off.

Lastability 58%
The going is tough, and should provide a challenge for those who enjoy the action.