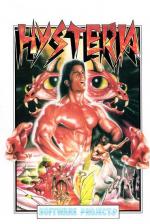 It's killing the flying squirrels that bothers me the most.

I can go for taking out the nasty skeleton things and I got a little bit used to blasting the galloping horses but every time I had to say bye bye to another furry friend... it really choked me.

Hysteria is the name of the game.

This is yet another in the continuing series of games-where-you-build-up-your-fire-power-by-collecting-and-killing-things called BWYBUYFBCAKT's (for short). In Hysteria you move a sprite - one so butch it was mistaken for a naked woman by at least one impressionable SU staffer - over assorted mythical landscapes. One mythical landscape per level. The first is sort of Medieval and the rest are um... different from that I expect. (Only joking, naturally I played through and completed the entire game.*)

Some odd adversaries on this one. As already indicated there are flying squirrels, horses, skeletons - and you kill them all. This is a bit odd. More odd is the way sometimes squirrel statues seem to turn into lemons or bits of jigsaw puzzle. The idea behind this is that each level has its head honcho baddie, a mega-bad guy much more dangerous s/he/it is an absolutely gigantic sprite that takes one hell of a lot of killing. You first have to kind of "call up" the baddie by building up his face in a window in the top of the screen - this is where those bits of jigsaw puzzle come in. As you grab each bit so the complete face is formed.

Having got the baddie to appear in the guise of a sort of bouncing slug (very threatening!) you have to kill him. This means firepower-a-gogo, and using your defensive shields a lot. As you score hits so the face disappears but then as it gets blasted, so does yours (in another window) so that's fair isn't it? If by any slim chance you manage to completely destroy the slug then it's onto Level 2.

Level 2 is more of the same though it also features some hilarious knights that zoom across the landscape as though on fast forward. Pretty neat. The bad guy on this level looks curiously like a Greek Travel agent I once knew who sold dodgy tickets but I expect it's a coincidence.

The range of fire power you can collect is pretty impressive. You begin with humble lightning bolts, but can graduate to long black lines and orbiting frizbees. If you do really well you can even get a backpack affair and take to the air.

Though it's easy to sneer about the plot - it's more or less the same as Sidewize and countless other games - Hysteria is actually excellent. It's really fast, graduates in difficulty at just about the right rate and looks excellent. There are options to play the game in straight black and white or in colour - the colour option does not mean attribute craziness, it looks fine - there's even a sort of half attempt at relative scrolling, which works OK.

Graphic design is excellent, stylish and individual and there are signs that real effort has gone into this one - check out the ultra-sophisticated High Score table for example. So minus one for being similar plotwise to a number of other games around at the moment, but otherwise, wonderful, wonderful, wonderful.

* Read the standard Gremlin - some of this may not be completely true here.

Not that original but visually excellent. Very fast and just difficult enough to keep you involved - it's a winner.

Not that original but visually excellent. Very fast and just difficult enough to keep you involved - it's a winner.